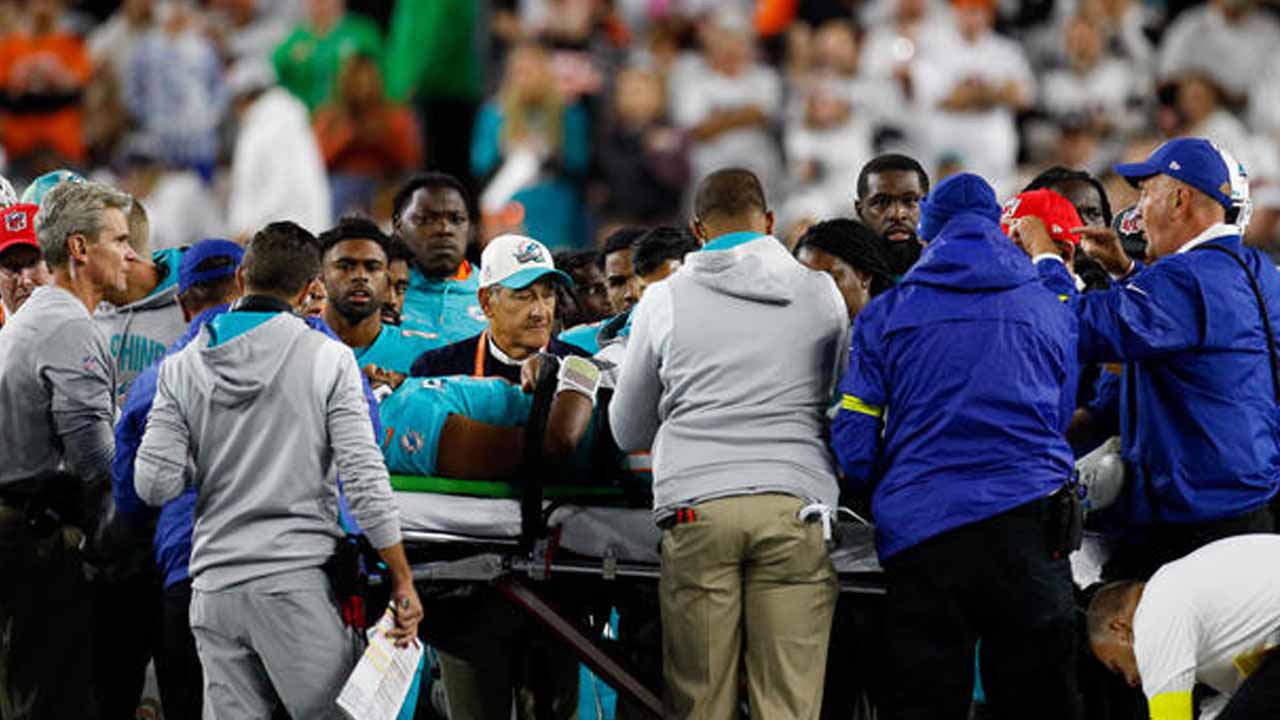 The NFL Players Association has fired the unaffiliated neurotrauma consultant who evaluated Miami Dolphins quarterback Tua Tagovailoa after he stumbled off the field against Buffalo last weekend, a person familiar with the decision told The Associated Press on Saturday.

The person who confirmed the firing, which was first reported by Pro Football Talk, spoke to the AP on condition of anonymity because a joint review by the NFL and its players' union into Tagovailoa's quick return to Sunday's game is ongoing. A source also disclosed the firing to CBS Sports NFL Insider Jonathan Jones.

A spokesperson for the NFLPA, however, would not immediately confirm the firing when reached by CBS News.

"This is an ongoing investigation which we are unable to provide any official comment or confirmation on," NFLPA spokesperson George Atallah said in a brief statement. "When we are able to provide details we will reach back out."

There are three unaffiliated neurotrauma consultants (UNC) at each game. They are jointly paid by the league and the players' union to work with team physicians to diagnose concussions. The NFLPA is exercising its right to terminate the UNC directly involved in the decision to clear Tagovailoa, who sustained a concussion following a frightening hit just four days later at Cincinnati on Thursday night.

Tagovailoa initially seemed to exhibit concussion symptoms after the hit to his head during the home game against Buffalo, but he was cleared by a team physician and UNC to return. He and the team later explained his legs were wobbly because of a back injury.

After the hit on Thursday, when 6-foot-3, 340-pound Bengals defensive tackle Josh Tupou slammed him backward into the turf, Tagovailoa's hands froze up and his fingers flexed awkwardly in front of his facemask for several seconds as he laid on the turf in Cincinnati. He remained on the ground for several minutes until he was taken away on a stretcher and sent to a hospital. He was released from the hospital and flew home with the team hours later.

It's unknown whether there's any correlation between the two injuries. Concussions are common in the NFL, especially when a player is thrown to the ground by a man Tupou's size and his head hits the turf.

Dolphins coach Mike McDaniel defended the team's handling of the quarterback's injury against the Bills, when he took a hit from linebacker Matt Milano late in the first half and appeared to knock his head on the turf. Tagovailoa stumbled when he got up and was taken to the locker room for evaluation, then returned to the game at the start of the third quarter.

McDaniel reiterated Friday that Tagovailoa was cleared by several layers of medical professionals during that game and said the QB did not have a head injury, which is why he was not in the concussion protocol heading into Thursday's game.

Many observers questioned why Tagovailoa was allowed to return to the field against the Bills. The joint review by the league and NFLPA will examine the steps taken and a report will be issued.

McDaniel said Friday there is no timetable for Tagovailoa's return.

The Sunday incident prompted the NFL and NFLPA to jointly review the extent of his injuries and whether the Dolphins followed proper concussion protocol that day. The results of the joint investigation have not yet been released.

"Ninety-nine point nine percent of the time that player is ruled out of the game without even thinking," CEO of the Concussion Legacy Foundation Chris Nowinski told "CBS Mornings" co-host Nate Burleson on Friday.

Nowinski, a neuroscientist, said that the Dolphins put Tagovailoa's life in danger and failed to protect him.

Tagovailoa tweeted a statement on Friday evening, thanking fans for their support.

"It was difficult to not be able to finish the game and be there with my teammates, but I am grateful for the support and care I've received from the Dolphins, my friends and family, and all the people who have reached out," he said. "I'm feeling much better and focused on recovering so I can get back out on the field with my teammates."