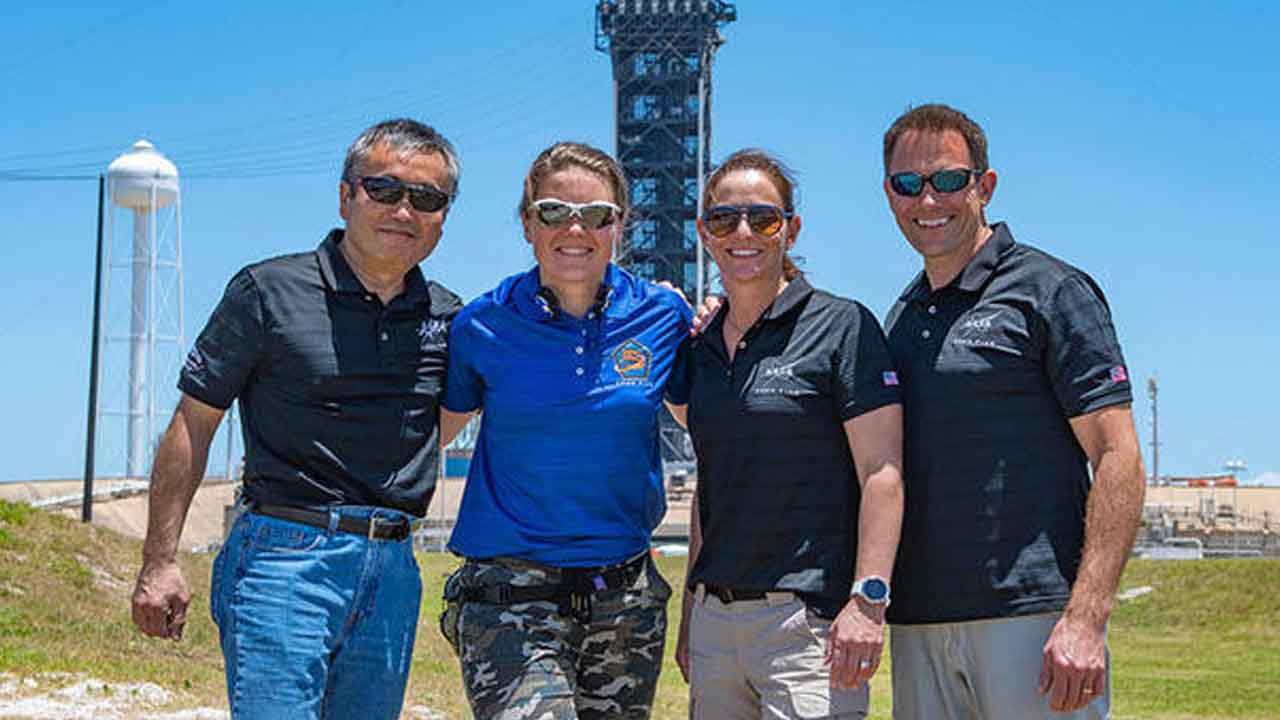 Despite frigid U.S.-Russian relations, cosmonaut Anna Kikina is poised to become the first Russian to launch on an American rocket in nearly two decades and the first to fly aboard a SpaceX Crew Dragon ferry ship for a flight to the International Space Station.

The 38-year-old Kikina, the only active-duty female in Russia's cosmonaut corps, will join Crew 5 commander Nicole Mann, Josh Cassada and Japanese veteran Koichi Wakata for blastoff from historic pad 39A at the Kennedy Space Center at 12 p.m. ET Wednesday.

Forecasters predicted good weather locally, although mission managers were keeping close tabs on high winds and waves down range along the spacecraft's northeasterly trajectory over the Atlantic Ocean that could cause problems for booster recovery operations and abort scenarios.

Mann, a Marine Corps colonel and F/A-18 carrier pilot, is the first native American woman to be assigned to a spaceflight. Cassada holds a doctorate in high energy physics and is an accomplished Navy pilot in his own right. Wakata, who holds a doctorate in aerospace engineering, is making his fifth spaceflight with a combined 347 days in orbit.

"Looking forward to launch tomorrow. Let's do this!" Mann tweeted.

Kikina, like Mann and Cassada, is a rookie, but like her U.S. crewmates, she's had years of training while waiting for a flight assignment. A last-minute switch from an expected Soyuz flight to the Crew Dragon caught her by surprise.

"My leaders just appoint me and told me, do you want to be part of Crew 5?," Kikina told reporters, speaking in broken English. "Yes! Why not? But I was so surprised."

If all goes well, Mann and Cassada will monitor an automated rendezvous and approach to the space station, moving in for docking at the lab's forward port around 4:57 p.m. Thursday.

Standing by to welcome them aboard will be Crew 4 commander Kjell Lindgren, Bob Hines, Jessica Watkins and European Space Agency astronaut Samantha Cristoforetti, the current station commander. They launched aboard a Crew Dragon last April and plan to return to Earth on October 13.

Also awaiting Mann and her crewmates at the ISS: cosmonauts Sergey Prokopyev, Dmitri Petelin and NASA astronaut Frank Rubio, who arrived at the lab complex on September 21 aboard a Soyuz spacecraft.

Kikina originally expected to fly aboard a Soyuz. But she was assigned to Crew 5 after NASA and Roscosmos, the Russian federal space agency, agreed on a new seat-swap plan intended to ensure at least one U.S. astronaut and one Russian cosmonaut are on board the station at all times.

That way, if a medical emergency or some other issue forced a U.S. or Russian spacecraft to depart early, taking its crew with it, both nations would still have personnel on board to operate their respective systems.

"With flight of Soyuz and flight of Crew 5, we will start what we call integrated crew, or exchange flight, when one crew member from Russian segment will fly on American vehicle and one American will fly on Russian vehicle," veteran cosmonaut Sergei Krikalev, now a senior Russian space manager, told reporters Monday.

"And this type of exchange will increase the robustness of our program, and we will continue this practice to make our program more reliable."