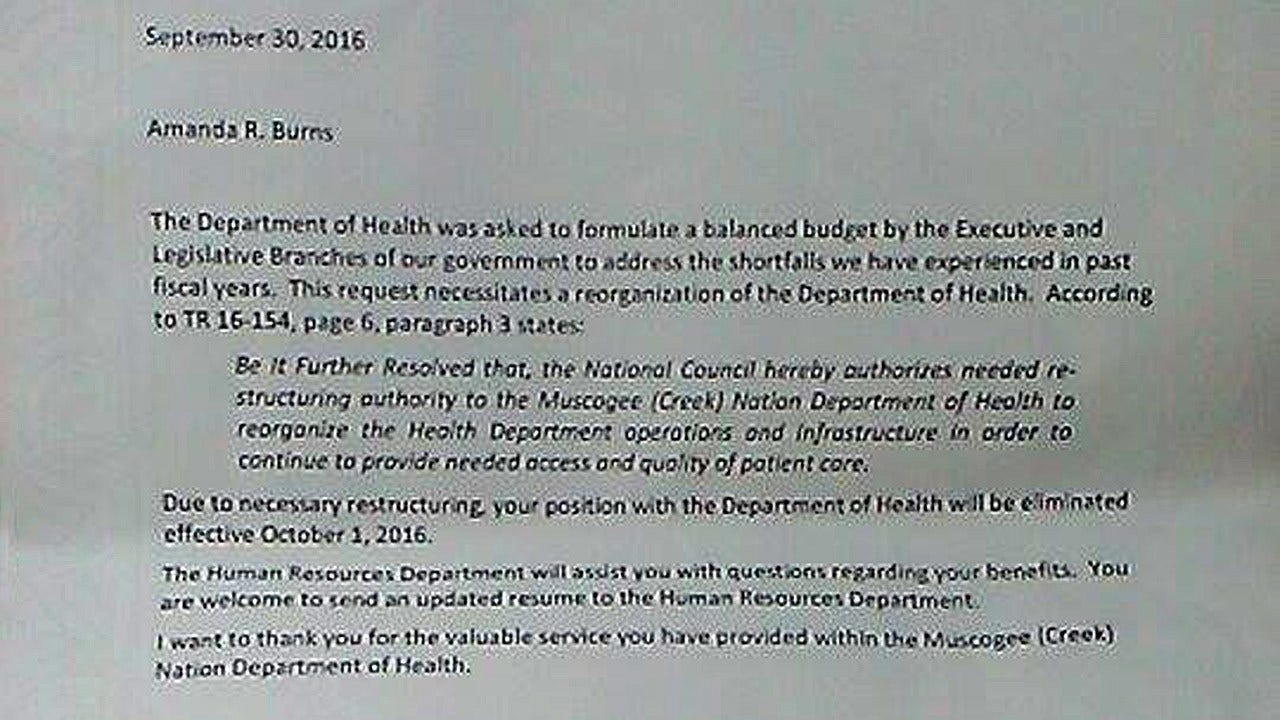 The Muscogee (Creek) Nation Department of Health initiated mass layoffs Friday at several of the tribe's health facilities, blaming a deficit in the health department's budget.

Sources said hundreds of people received termination letters signed by MCN Principal Chief James Floyd on September 30, 2016, and that the employees were escorted off tribal property by tribal police immediately after they were given the letters and allowed to collect their personal items.

Tribal officials confirmed that 123 employees were laid off and that 55 others were transferred and placed within the tribe and department of health.

"These actions represent consolidations and realignment to continue quality of care to the patients and to remain within the fiscal year 2017 budget. The administration was made aware of this shortfall in February 2016," said Creek Nation Acting Director of Public Relations Thompson Gouge.

In the letter to employees, Floyd cited recent legislation approved by the National Council that authorized MCN health to "reorganize the Health Department operations and infrastructure in order to continue to provide needed access and quality of patient care."

Floyd said the deficit in the health budget didn't allow enough funds to pay for the expense of health personnel in the 2017 fiscal year, which began October 1.

In a September 30, 2016, YouTube video addressing the layoffs, Floyd said the layoffs were conducted on the last day of the tribe's fiscal year, and was the last step of the restructuring of the health department.

"Some will be transferred to other positions and unfortunately, some will have to be let go," Floyd said.

The chief said that the plan was to make sure the tribe's health operations continued to run following the loss of staff.

"It's unfortunate it involves people, I know it will be disrupting jobs and families, but we can still ensure that come Monday morning, we have providers in place, we're providing quality care," Floyd said.

Amanda McNew, 33, is a Muscogee (Creek) Nation citizen and was employed as an office assistant with Creek Health in Okmulgee for six years. In fact, she celebrated her six-year anniversary with the department just two days before she received a letter Friday at 3 p.m. signed by Floyd that terminated her employment.

McNew, a single mother of two boys, said she recently moved to Beggs because her oldest son is mentally challenged and Beggs Public Schools offers a great special education program for elementary students, and the small town was just minutes from her job.

But now she lives in Beggs and doesn't have an income.

"I'm trying not to be mad, I'm trying to stay calm about it as much as I can," McNew said.

McNew said she's not worried about herself, but the elder Muscogee (Creek) citizens who also lost their jobs.

"I have always been so proud to be Creek until Friday happened," McNew said. "There are some people who are 62 and 63. Creek people who have worked here 30 years and now they can't retire because they got let go. My heart went out to those people. The atmosphere was horrid. People were crying. They were lost because they didn't know it was going to happen."

McNew said the layoff notifications began Thursday afternoon and continued Friday morning when the tribe's Lighthorse Police Department showed up at the various health facilities to escort the terminated employees out.

"They said they were going to start with management, but it wasn't management that took a hit," McNew said. "It was the people underneath them that took the hit. That was wrong. So they can keep getting their huge paychecks every two weeks. Being a Creek citizen and I lost my job that I loved going to everyday."

Now, McNew said she will have to seek help from the tribe's social services programs for assistance when she's been able to always work and take care of her family without relying on the tribe's programs.

"I'm going to have to go to these programs to get help," she said. "I shouldn't have to lean on someone else to take care of my children. It wasn't fair at all and for them to treat us like criminals, it could have been handled much better than it was."

Floyd said the layoffs Friday should be the tail-end of the restructuring of the health department, but that no layoffs were expected in the tribe's governmental body.

The Muscogee (Creek) Nation recently was recently in the news when it held the grand opening August 25, 2016, of its $365-million Margaritaville Restaurant And Casino.