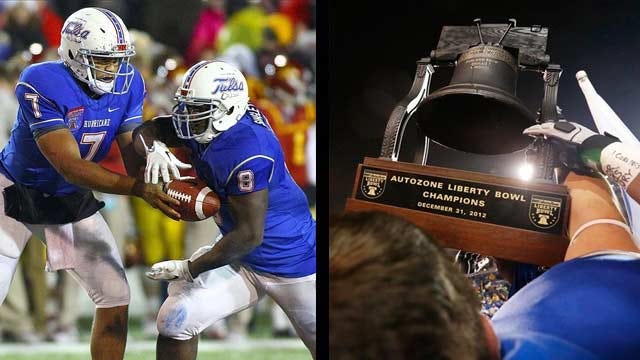 Put this one in the wind column.

The Golden Hurricane rebounded from a shaky start Monday afternoon to blow the Iowa State Cyclones right off the field and take home the 2012 Liberty Bowl title.

It's rare that a college football team gets an opportunity to make up for a season-opening loss with a rematch in its season-finale. So rare in fact that since the NCAA added a 12th regular-season game to the schedule in 2006, this is the very first time it's happened.

To be exact, the Golden Hurricane ran 60 times for 316 yards, pounding the Cyclones' defense into submission.

Despite the outcome, the game didn't start well for Tulsa. Iowa State's early 3-0 lead turned into 10-0 when Cody Green's pass for Keyarris Garrett was intercepted and taken back for a touchdown by Jeremy Reeves.

Facing a third-and-seven from deep in its own territory, TU was in danger of giving it back to the Cyclones and losing control early. That's when Green found Trey Watts for a 13-yard hookup and the Golden Hurricane never looked back. Ja'Terian Douglas followed that with a 17-yard run and next thing you knew, TU was inside the Iowa State 10. The nine-play, 75-yard drive was capped off in familiar fashion Alex Singleton plunged in from two yards away to cut the ISU lead to 10-7.

Iowa State was in no mood to quit, as two plays later Sam Richardson found a wide-open Ernst Brun on the right side of the field. Brun dashed 69 yards to the end zone to give ISU the 17-7 advantage. It was a complete breakdown by the Golden Hurricane defense, but it might have been the final mistake that unit made all day.

After TU went three-and-out, Iowa State got it back with another opportunity to blow the gate open. This time though, Shawn Jackson and the Hurricane front seven had other ideas. Jackson sacked Richardson on second down, and then on third-and-long, he sacked him again. The TU sideline exploded as Jackson excitedly broke out Cam Newton's "Superman" celebration, and the team seemed to have a different energy from that point on.

The sack forced ISU to punt out of its own end zone and TU took over at the Cyclones' 41. The drive started in style for the Hurricane when Douglas took a reverse and dashed 22 yards to the ISU 19. Three plays later, Green kept the ball on a read-option and dashed in from eight yards out to cut the lead to 17-14.

At this point, Tulsa clearly had the momentum and after forcing a Cyclones' three-and-out, officially seized control.

After marching 59 yards on five plays, Singleton finished the job again, taking Green's toss and walking into the left side of the end zone untouched to give Tulsa the lead for good.

The Cyclones nearly cut into it just before the half, but Edwin Arceao's 34-yard field goal attempt sailed wide to the right, keeping the score 21-17 at the break.

Much of the third quarter was spent in a defensive stalemate, but just under seven minutes to play, TU put together a season-defining drive.

The Golden Hurricane marched 59 yards to the ISU 17 before the Cyclones finally forced a fourth down, but a late-hit penalty on ISU's Cleyon Laing gave TU a first-and-goal at the eight. Four plays later, it was fourth-and-goal at the ISU one and Bill Blankenship elected to go for it. Guess who got it.

If you didn't guess Singleton, you're not paying attention. The "A-Train" powered in for one final touchdown, giving TU the 28-17 lead late in the third. The 10-play drive consisted of nine runs as the Golden Hurricane physically imposed its will against its Big 12 opponent.

TU's freshman kicker Daniel Schwarz put the finishing touches on the win by drilling a 40-yard field goal in the fourth quarter.

When looking at the numbers, it's easy to see how TU pulled away. The Golden Hurricane defense held Iowa State to just nine total first downs, 268 total yards and 2-14 on third down. Tulsa won the turnover battle 3-1 and held an 11-minute time-of-possession advantage.

• Singleton's three touchdowns give him 24 on the season and 43 for his career. He will leave as TU's all-time leader in rushing touchdowns and total touchdowns along with holding the single-season record in both of those categories. In addition, Singleton ranks No. 5 on Conference USA's all-time rushing touchdown list, ahead of names like Matt Forte and Chris Johnson.

• The game marks the 30-year anniversary of the 1982 Liberty Bowl, the site of Bear Bryant's final game.

• Senior safety Dexter McCoil intercepted ISU's Steele Jantz in the fourth quarter, giving McCoil 18 picks in his decorated career. That ties him for No. 1 on C-USA's all-time list.

• The three-headed ground monster of Trey Watts, Ja'Terian Douglas and Alex Singleton finished the season with a combined 3,204 total yards of offense and 35 touchdowns.

• TU is set to host Iowa State at Chapman Stadium next season.