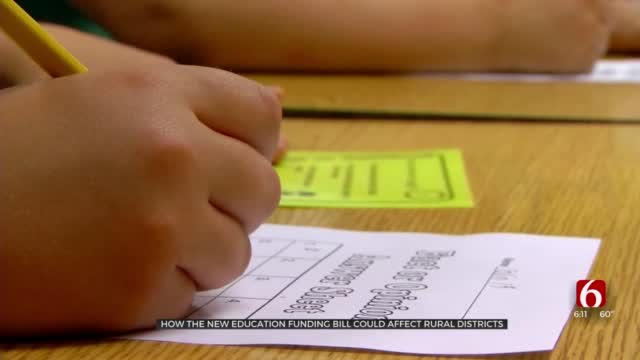 Oklahoma City and Tulsa Public Schools have made their displeasure with the Oklahoma state legislature known after Governor Kevin Stitt signed a sweeping funding bill into law Wednesday. Rural districts across the state say they’ll feel the squeeze.

Currently, districts pick the highest enrollment numbers from either the current school year or the two years prior. The new law takes away that third-year option, forcing districts to choose either the current year, or the one year prior. District leaders said that change will make funding more volatile with ebbs and flows of enrolment.

“It allowed you to not to have to get rid of teachers and then turn around a year later and say oh we need you back. And those teachers won’t be there to get back,” Oktaha Superintendent Jerry Needham said.

He leads the district of around 700 students southwest of Muskogee.

Sulphur Public Schools Superintendent Matt Holder said a dip of 90 students over the past school year would have cost his district of 1,400 students between $300,000 and $400,000 under the new law.

The bill’s author said currently, students who transfer are being counted by more than one district costing the state big bucks.

“I’m very disappointed in the legislature for passing a law like this without even any input from our organization,” Don Ford with the Organization of Rural Oklahoma Schools said.

His organization represents 320 districts across the state. He said stability is everything for rural districts.

“Now it will be, you will know what your final enrollment is in May so in April you’ve got to start making decisions about who you’re going to cut, because you have to let them know by June,” Ford said.

“We adapt and overcome,” Needham said. “We’ll do the best we can with what they allow us to have.”