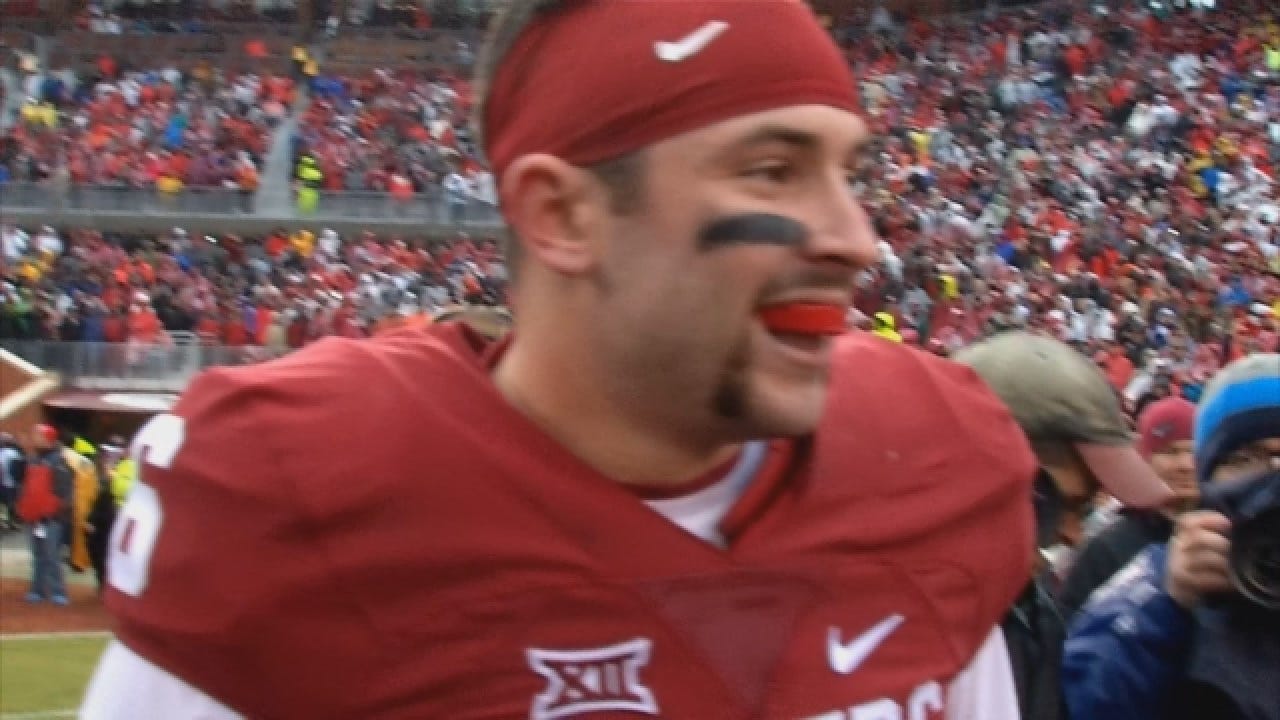 Baker Reagan Mayfield, a Sooner born and bred from the state of Texas. Incredibly a two time walk on, Baker literally introduced himself to Bob Stoops in 2014. Four years later, the walk-on would walk away with championship rings and a Heisman trophy.

When Baker Reagan Mayfield walked at Oklahoma in February 2014, it came with no fanfare, no cameras, no announcements. Because the head ball coach didn't even know he was there.

"After the very first welcome back meeting for the second semester with the team, a young man walks up to me and introduces himself says 'coach, I'm Baker Mayfield.' I said, 'you sure are aren't you,'" remembers Bob Stoops, former OU head football coach.

Stoops was familiar with the quarterback from Texas Tech, a true freshman walk on starter from day one.

"You're paying attention, they're winning their first five, six games and who's this true freshman I'm seeing all over the big 12 stats?" said Stoops.

But after his first season, Baker was disgruntled over losing his starting job due to injury and wasn't even guaranteed a scholarship offer so it was off to Norman, a move he said he felt like was coming home.

"The noises of the stadium, I can remember when I was seven years old walking in, 'boomer sooner' back and forth in the stadium," said Baker Mayfield, 2017 Heisman Trophy winner. "Those are things I dreamed of hearing and being on the field in my own jersey in front of that."

OU already had a popular starting quarterback in Trevor Knight, fresh off a stunning season-ending performance. But it didn't stop the plucky Tech transfer from doing what he did best - compete.

"Baker made the big plays, he made special plays, he stayed away from the ones that really hurt ya and he just did it more consistently," said Stoops.

Coach Stoops and Lincoln Riley named Baker the 2015 starter and Mayfield did not disappoint.

"Watch him scramble and run," said Stoops. "He's gonna make you miss him, he's gonna find a way to pick up the first down. He's got as much arm talent as anybody that's ever come through here."

His uncanny ability on the field was matched by his remarkable leadership.

"Players you know, gravitated to him in the locker room and you knew they were going to fight with him, he just inspires that from the people he's around," said Stoops.

One of those players was newcomer receiver Dede Westbrook.

"There was never a dull moment with him," said Dede Westbrook, former OU receiver.

"I mean, it was just fun," Westbrook said. "He made the game fun, everyone around us. It was just fun to play."

But when it came to the game, Dede was wowed by Baker's insatiable thirst to win.

"I saw his work ethic, you know what I mean, and it's contagious," he said.

"He would pick me up in the morning drive me to workouts and after I got done with school and class and we were done for the day after dinner, I'd hit him up, he'd come pick me up and take me back home and it became a routine every morning until I got a car," Westbrook said.

"I don't know who suggested for him to live that far away from campus," said Mayfield. "If i would've had frequent driver miles, I definitely would've racked those up."

"The savviness. never giving up, he'd know how to lead a team," Westbrook said. "I did what I could. But if the balls aren't where they're supposed to be, there's no Dede."

Baker was shocked when Stoops stepped down after a hall of fame career, but he was certain Lincoln Riley would thrive as the new head coach.

"He changed my life in many ways, but I learned a lot about myself and the game of football that helped me throughout the years and will continue to help me as I grow and learn more," said Mayfield. "He set the standard. He's a great role model but then also how to prepare for your opponents."

Mayfield and Riley didn't miss a beat in 2017, a classic win in Columbus, a third straight big 12 title, a second college football playoff berth in three seasons and even in an overtime loss to Georgia, one of the most memorable Rose Bowl games in history. But that final year didn't come without unwanted headlines.

It's debatable how out of line the flag plant in Columbus really was, but no debate about two other unacceptable incidents. The drunken arrest in Arkansas and the ugly sideline antics at Kansas. Mayfield offered a public apology.

"I wasn't too concerned about it because I had admitted that I made mistakes and I got to learn from it and I was proud of that," Mayfield said.

"I think he handled it well," said Riley. "I appreciated even though those were so public that he owned them, he took responsibility, he grew from them."

All things considered, it was a career for the ages. Capped by hoisting the 2017 Heisman Trophy.

"All the summer workouts, all the tough times you went through with your teammates, all that was worth it because that wasn't just my award," Mayfield said. "That was all of us. Everybody that had impacted my life to help me get there, to that point, that was for them and we got to enjoy that all together."

The Heisman was followed by being selected No. 1 overall in the NFL draft by the Cleveland browns.

"To me the biggest difference is the mental aspect of the game," Mayfield said. "You gotta know football to be able to play at this level."

Baker's story in Ohio is just starting to be written, while his storied career at Oklahoma is in the books. And, may very well, never be matched.
"From a kid who grew up having dreams of going there, the fans made it a dream come true," he said.