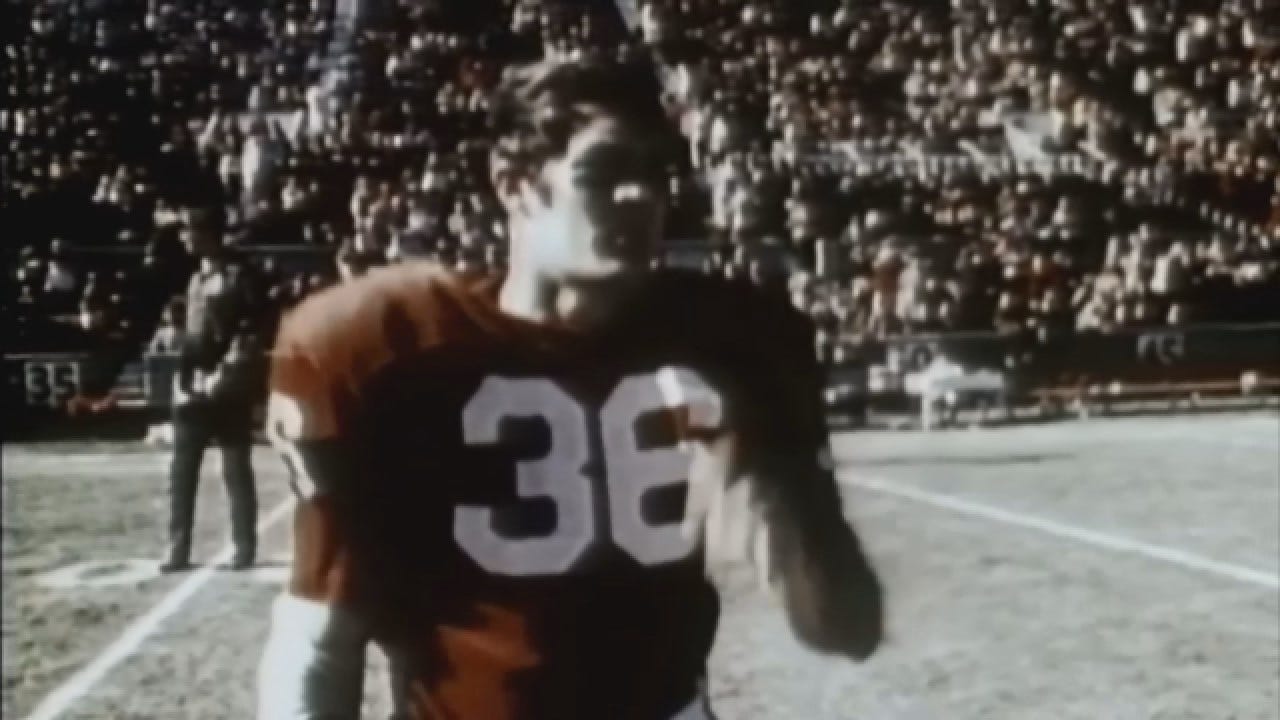 Billy Vessels' Heisman win inspired young boys across the state of Oklahoma who dreamed of playing for the Sooners. One of them was growing up in Miami at that time and has a special connection with our Kelly Ogle.

My dad, Jack Ogle, and Bob Barry were the radio broadcast team for OU Football in the 60's.

"I used to listen to them," said Owens. "And it'd paint that picture of this place here, that's when I first started saying 'hey, that's where I want to go to school.' It was my dream."

Owens learned from an early age, growing up in a small house in Miami, one of 11 children, that hard work was the only way to accomplish that dream.

"From the time I first started playing football, I looked for ways to get stronger, faster, quicker," he said.

Little brother Tinker, would himself become an All-American wide receiver at OU.

"I learned so much from him," said Tinker Owens of his brother. "I'd watch him work out like in track, and I would literally see him get sick because he works so hard wanting to be the best he could be."

And he'd become the best in college football.

"I mean he ricocheted up there, he was a ricochet romance," said Barry Switzer, Former OU Head Football Coach. "All you got was head gear and shoulder pads and run over people. He slithers."

The Miami Wardog tailback wore out defenses, he could run all day. He credits his conditioning coach.

"She used to take me five or six miles east of Miami and she would drive the car and I would run into town," said Owens. "If I started to slow down, she would honk the horn."

She was the pretty little cheerleader from the crosstown school. She stole Steve's heart when they were 13 and 14 years old and Barbara Owens is still coaching him today.

"She was my biggest supporter but my biggest critic... I think she saw something that i couldn't see in me," said Owens.

In 1966 during Owen's final year in high school, he was named the co-winner of the Oklahoma Running Back of the year. The lanky high schooler jokingly struck this Heisman pose that would prove to be prophetic. Owens narrowed his college choices down to OU and powerhouse Arkansas.

"They fired Gomer Jones here and guess who they hired, Jim McKenzie," he said. "Jim called me and said, 'forget all that stuff I was telling you about Arkansas, you need to follow your dreams and go to Oklahoma.'"

"The thing about coach was he made playing fun," Owens said. "He was tough on us, and he challenged us each day to get better."

"When we had a scrimmage in the spring of his freshman year, we lined him up at tailback, a lot of people thought ah he'll play tight end, he's not going to be fast enough to play tail back or whatever," said Switzer. "We had a goal line scrimmage, he scored about seven out of 10 plays"

Owens did not disappoint, being named all-conference running back his sophomore and junior seasons. However, the best was yet to come his senior season.

Owens did it between the tackles, a workhorse carrying the ball a mind-blowing average of 36 times a game for 1523 yards and 23 touchdowns to win the Heisman over a trio of quarterbacks.

Days after winning the Heisman, Owens was invited to appear on the Tonight Show with Johnny Carson, and he'll never forget what happened back stage in the Green Room.

Owens recalls sitting between them, holding the Heisman when and aide for Johnny Carson walked back in.

"She says 'you've got a call from the president of the United States, Richard Nixon,'" remembers Owens. "I noticed Muhammed Ali and Charlton Heston looked at each other like 'who is this guy?'"

Steve and Barbara, the two kids from Miami, would go to the White House and meet President Nixon and even fly on Air Force One with him. Owens' life would never be the same.  In 1970, he was drafted in the first round by the Detroit Lions. Despite an injury plagued pro career, he made the pro-bowl the one season he was completely healthy.

"I could play at that level and that was important to me," he said.

He retired after five seasons in the NFL, and now lives in Norman where he's built an extremely successful insurance and financial business. His best friend? A guy named Billy Sims.