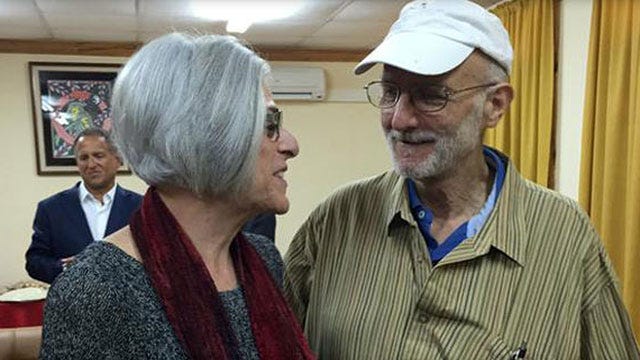 The Obama administration announced Wednesday that the United States is taking steps to restore full diplomacy with Cuba, a historic move that will end 50 years of frozen relations the communist nation.

Mr. Obama called Cuban President Raul Castro on Tuesday -- the first engagement at the presidential level between Cuba and the United States since the Cuban revolution -- to discuss the release of Gross and one other man characterized as a U.S. intelligence asset, as well as the United States' release of three Cuban intelligence officers. They also discussed areas of potential cooperation between the two nations, including counter-terrorism efforts.

The U.S. and Cuba will now immediately begin discussions to re-establish diplomatic relations, including plans to establish an embassy in Havana. Mr. Obama has also directed Secretary of State John Kerry to review Cuba's designation of a state sponsor of terrorism. Additionally, the U.S. is taking a number of steps to significantly increase the flow of travel and commerce between the two countries.

Senior administration officials stressed Wednesday that differences remain between the U.S. and Cuba on issues such as democracy and human rights, and the U.S. will continue to press Cuba on those issues.

"Our emphasis on human rights will be just as strong and we believe more effective under this policy," one senior administration official told reporters.

The Obama administration is not at this time calling on Congress to reverse laws on the books that have kept relations with Cuba frozen, though Mr. Obama and other administration officials have briefed leaders in Congress on its discussions with the Cuban government.

Some lawmakers have already expressed their disappointment if Mr. Obama's moves.

"Barack Obama is the worst negotiator... maybe in the history of this country," Sen. Marco Rubio, a Republican from Florida, said on Fox News.

Sen. Bob Menendez, a Democrat from New Jersey who is the outgoing chairman of the Senate Foreign Relations Committee, said in a statement that "trading Mr. Gross for three convicted criminals sets an extremely dangerous precedent."

The administration has pushed back against that specific critique, noting that the unnamed intelligence "asset" who was also released from Cuba provided the U.S. with critically important information.

Relations with the communist nation have been a politically fraught issue since the Cuban revolution more than half a century ago. Still, views on the issue have shifted in recent decades, with younger Cuban-Americans expressing more interest in thawing relations between the two countries.

At the same time, Cuba and the United States have quietly worked together on various diplomatic fronts in recent years. For instance, Cuba was one of the first nations along with the United States to send doctors to Africa to fight the ongoing Ebola outbreak.

Perhaps even more critically, opening up relations with Cuba "substantially opens the door for the United States in the hemisphere," according to one senior administration official.

The United States' prior policy of isolation had been a "huge burden, if not an albatross" on U.S. relations in the Western hemisphere, the official said. "This could be transformative event for the United States in Latin America."

Mr. Obama authorized his administration in the spring of 2013 to begin exploring the possibility of opening up relations with Cuba. In June 2013, Cuban and U.S. officials met in Canada for their first face-to-face meetings on the issue. Canada hosted the meeting but did not participate in the diplomatic talks.

The Vatican, however, did play a role. Pope Francis sent Mr. Obama and Castro a letter, urging them to resolve the Alan Gross situation. The Vatican also hosted U.S. and Cuban delegations over the fall to review the final diplomatic terms that were announced Wednesday. When Mr. Obama spoke in person with Pope Francis earlier this year, according to administration officials, they talked about Cuba more than anything else.