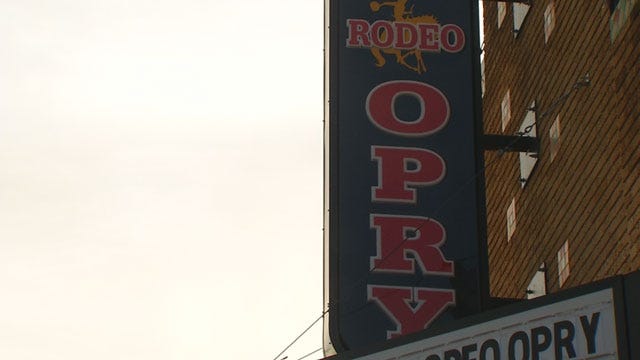 That's what first led Fred Davis to the Opry decades ago.

"We were looking for country music without dancing and flirting," added Davis.

Davis worked as an accountant for the Opry and never missed a Saturday show.

But to truly understand his love of the Opry is to underwent his love for his wife Oleta.

"I married my wife the day after I was discharged from the Navy in World War II, that was my last and only," said Davis.

When Oleta passed away a couple years ago, Davis kept coming to see the shows.

"Let's just say it was easier than staying at home," said Davis.

But when Fred suffered a heart attack and stroke, he was forced to stop coming to the Opry as well.

Recently, the organization 'Wish of a Lifetime' which grants wishes to the elderly, asked Davis what he wanted to do.

It was no surprise that Davis asked to back to the Rodeo Opry one last time.

The Opry dedicated part of one Saturday performance recently to Fred and Oleta Davis, choosing to play some of the couple's favorite songs.

"She'd say I got to where I'm going. I'm waiting on you," said Davis, who has kept a picture of his Oleta in his wallet since she gave it to him when she was a teenager.

Davis said Oleta would have approved of his wish to spend one more Saturday at the Opry.

If you have a story to tell, go to our Red Dirt Diaries page, and fill out the form.