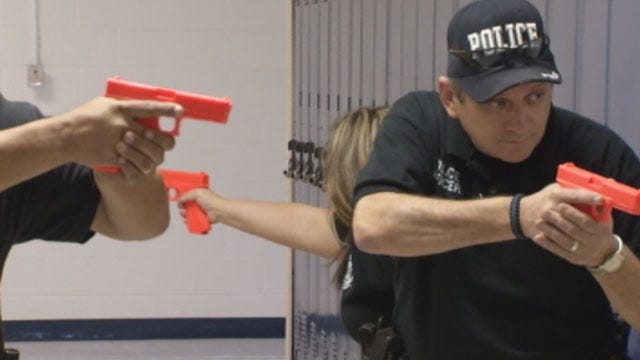 Officers are in Wagoner County for a statewide effort to train law enforcement on what to do during a shooting inside an Oklahoma school.

Several agencies including the Oklahoma Highway Patrol, Muskogee County Sheriff's Department, Coweta Police Department and Porter Police Department learned techniques for how to work in teams and use effective communication in a crisis.

"We're getting our guys prepared to be able to be able to go in," said Lt. Ben Crockett of the state highway patrol. "We'll give them the tools and the understanding of the principals and the methods we use to go in and take care of an active shooter."

Officers already know the basics, but this seminar shows them how react in a school setting. They conducted the training in Porter Middle school. Law enforcement swept the hallways and cleared classrooms as they used unloaded guns to stage their training.

This is how law enforcement would act in the event of a worst-case scenario: a shooter opens fire on campus. Officers from across Oklahoma met trained under a program called ALERRT, or Advanced Law Enforcement Rapid Response Training.

"We can't actually get these guys in gun fights, but what we can do is try to increase the amount of stress they have on their bodies as much as possible," said Ed Boese, ALERRT instructor and retired Stillwater Police Officer.

Oklahoma law enforcement started training 18 months ago, and there have been about 40 classes like the ALERRT program. Crockett says the program was created after the Columbine High School shooting in Colorado in 1999. He says this program will help change the role of first responders since in Columbine's case, Crockett says it took 45 minutes before a police gun ever entered the school.

"With that type of event folding, we can't respond to it like that ever again," said Crockett. "We're going to have to go back to the old days when first responders took care of business. The training we've had encompasses high stress, force philosophy, shoot no shoot, this is more geared to guys coming together as a team to enter."

The officers broke into teams of two and four and went through several set-up scenarios. The seminar gives law enforcement the tools and the mindset to handle an active shooter situation when lives are on the line.

"Our ultimate goal is to make them learn how to deal with the shakes and the rapid heartbeat," said Boese. "And deal with all the chaos that's going on and still be able to perform in a safe manner."