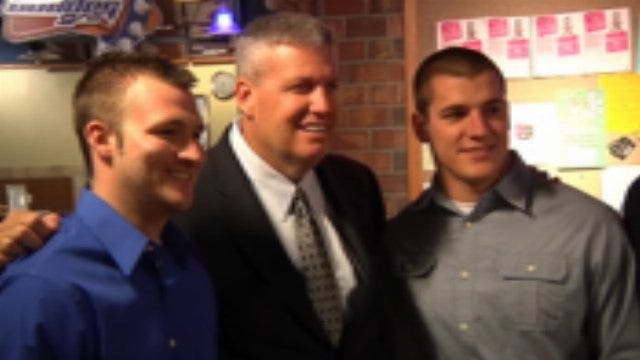 The twins were born in Ardmore and eventually attended SWOSU from 1981-87. They played football for the Bulldogs, though neither's career was particularly long or illustrious as a player.

The Ryan brothers eventually found their calling in coaching football, just like their father Buddy, who coached in the NFL for the Philadelphia Eagles and Arizona Cardinals.

Rob Ryan eventually worked his way up to coaching defensive backs under his father at Arizona.

But he returned to the college ranks and began coaching at Oklahoma State as the Cowboys' defensive coordinator. After three years at OSU, Rob Ryan returned to the NFL and worked his way through several teams.

He is currently the defensive coordinator for the Dallas Cowboys.

Rex Ryan also worked his way up to the NFL ranks to join his father's staff at Arizona, coaching linebackers for the Cardinals in 1994.

Similar to his brother, Rex Ryan returned to the college ranks and took over as defensive coordinator at OU.

He spent just one year with the Sooners before returning to the NFL, and is currently the head coach of the New York Jets.

News 9 was at the induction to find out what the Ryan brothers had to say about their days at SWOSU, OU and OSU and growing up in Oklahoma.