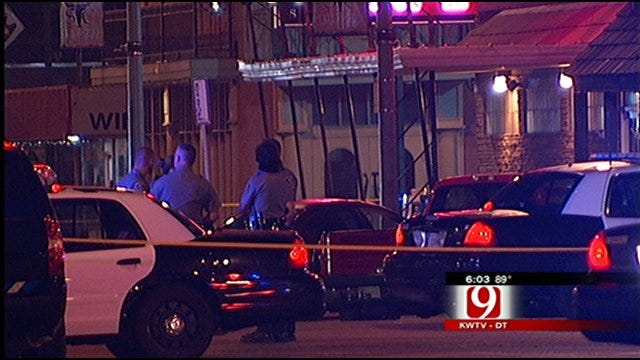 OKLAHOMA CITY -- An Oklahoma City Sheriff's Deputy is in critical condition after a gunman shot him in Stockyards City early this morning. Deputies and Oklahoma City Police officers are on the search for the suspects.

Prayers are coming from all across the community especially from the folks in Stockyards City who know Major John Waldenville.  Business owners here who've known him for years say he's a very friendly and helpful man who everybody loves.

Early this morning canine units searched the area and a helicopter hovered over Stockyards City as deputies combed the crime scene in search of two gunmen.

"I can just say that this shooting tonight was done by a bunch of cowards or at least a coward or more the way it happened," Oklahoma County Sheriff John Whetsel said.

Deputies and police said the shooting happened outside Cattlemen's Steakhouse on south Agnew around midnight.

Waldenville was doing a nightly money drop at the bank across the street from the restaurant.

"He was targeted for this act," Whetsel said.  "He was in full uniform.  He's a law enforcement officer and never had the opportunity to go for his weapon.  His weapon was strapped and the coward shot him in the head.  It was an ambush."

Waldenville has been with the Sheriff's Office for 25 years and has worked security at Cattlemen's on the side for nearly a decade.

The restaurant owner said the deputy always did a great job and thought the best of everybody.

"He's the kind of face you can remember," Stephanie Atchley said.  "We close up at night and he'll walk you to your car when you want him to."

Atchley said she was shocked.  "It was just a sad deal, not something I'd ever hope for anybody, especially John, because he does so much for us down here."

The community is praying for the recovery of the seasoned veteran.

"We have a guy who loved law enforcement, who had his MBA in business, becoming the CFO at the sheriff's office, at the same time belonging to the SWAT team, and doing the off-duty work," Whetsel said.  "He loved his job."

Police are still searching for two gunmen and there is no detailed description at this time.   They believed the gunmen took off with the money bag and the receipts but had no confirmation on whether money was inside.