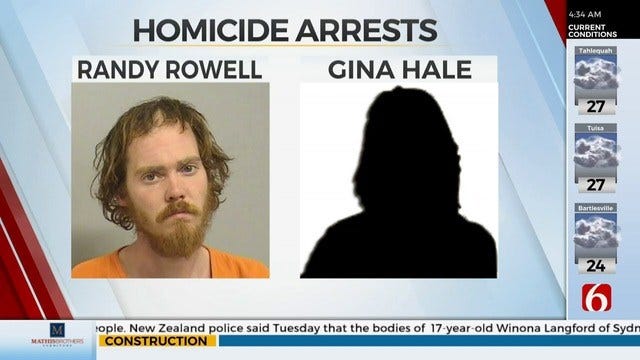 Tulsa Police said two people are in jail  in connection to the discovery of a body in a Tulsa soccer field.

Police said someone walking their dog found James Gray's body--with a gun shot wound to the head--in a parking lot on Monday. Police said he was robbed, then shot and killed by two people he knew.

Officers said Gray's body was found in a parking lot next to the River Parks West Trail near South Elwood Avenue and West 37th Place.

Detectives said they were able to track down Gray's car and found both Rowell and Hale inside the vehicle. Police said their early investigation shows Hale asked Powell to help her rob the victim before the shooting.

They are both being held in the Tulsa County Jail for first-degree murder.

"Now the hard part starts," said Tulsa Lt. Brandon Watkins, Homicide Division. "We're doing all the work on the back end and the stuff to make sure everything sticks. But yeah, we had evidence, and we will be continuing to get other evidence as well.