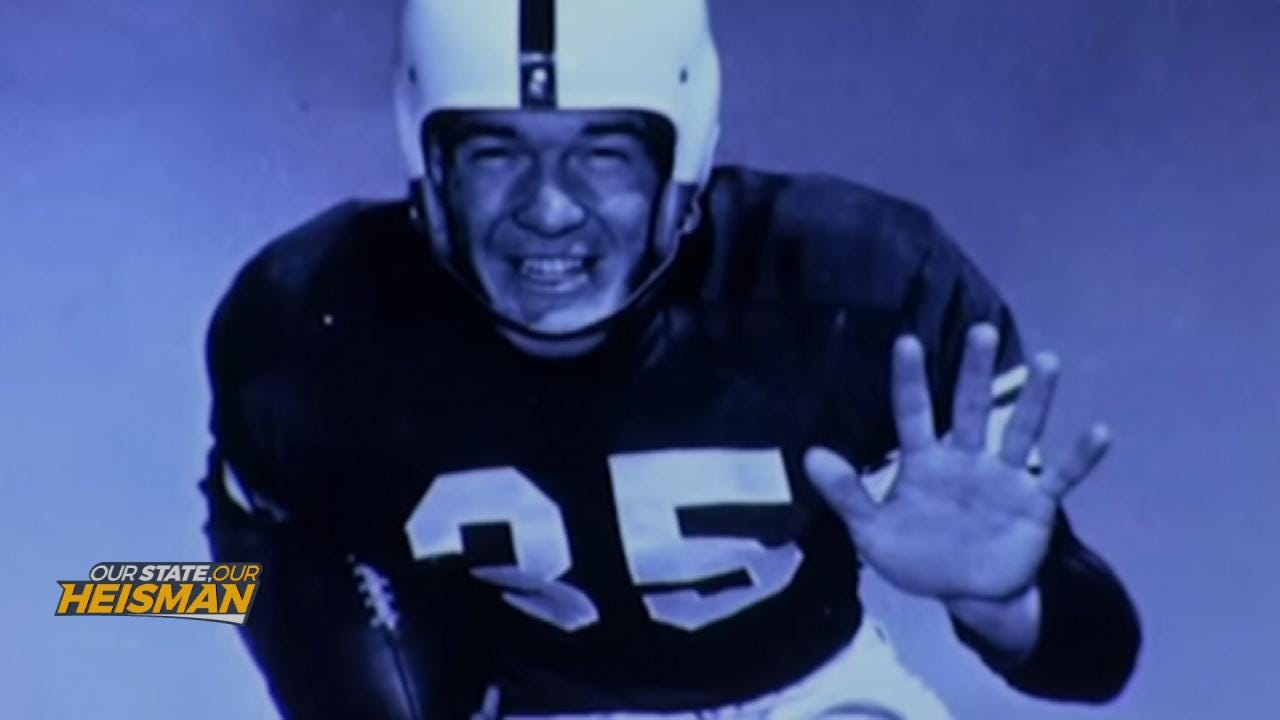 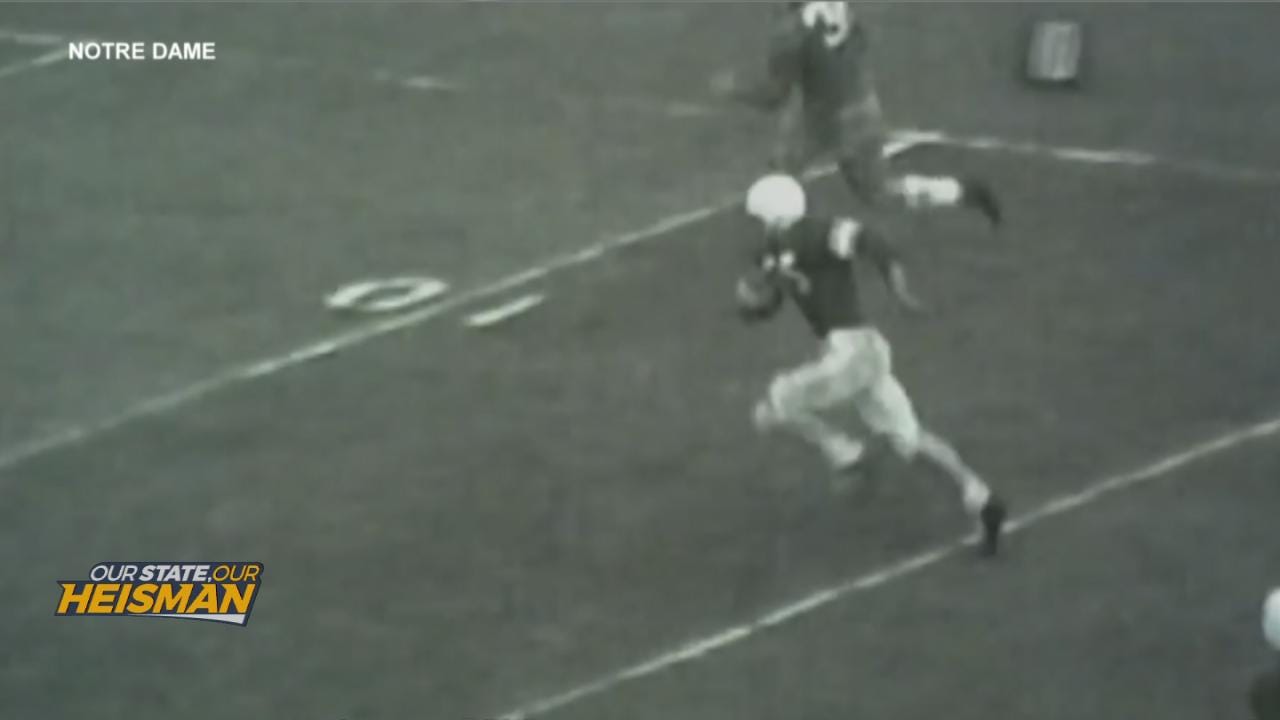 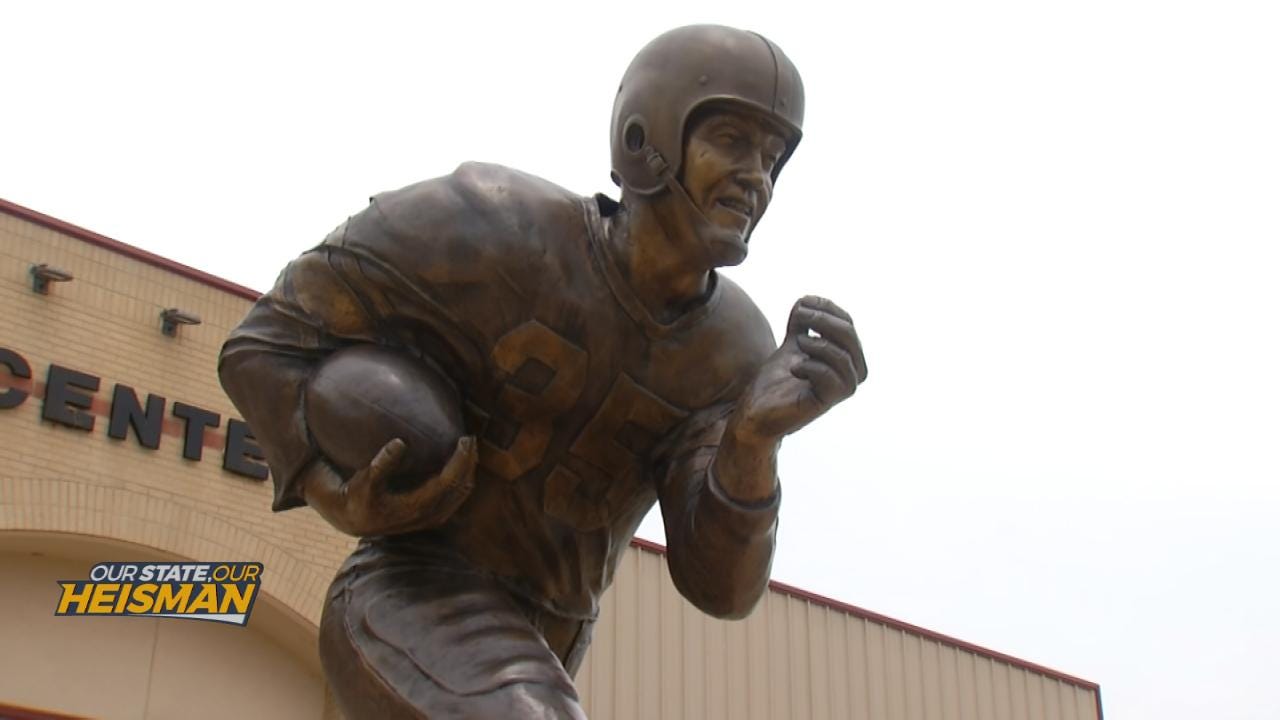 The Sooner that started it all is Billy Vessels. Vessels entered the national spotlight in his 1952 Heisman season that included an historic college football game.

From his high school field in Cleveland, to the University of Oklahoma, to the Heisman trophy and beyond, Billy Vessels was a remarkable athlete.

Coming off injuries his junior year at OU, no one would have predicted what would come next for Billy Vessels. Then a 1952 game against Notre Dame in South Bend, Indiana changed everything.

"Oklahoma's brilliant quarterback Eddie Trotter steps back and fires one into the arms of Bill Vessels who sprints over the goal for a touchdown," the announcer said.

The Sooner clash with The Fighting Irish was the first nationally televised college football game.

And they got to see this amazing athlete named Billy Vessels.

"From the Notre Dame 47, Billy Vessels slashes through the tackles for seven," the announcer said.

"Think he had both great speed, but also he had to be a grinder because that was the kind of defense he was playing against," Dean said.

Michael Dean is an OU Sports historian and has been part of the OU football broadcasts for nearly 30 years.

And Billy Vessels put on a show in the game against the Irish in front of 57,000 fans, and television viewers across the country.

"Before Notre Dame's startled defenders can give chase, he's off on a 62-yard scoring tatter, to give the Oklahoma Sooners a 14-7 advantage at the end of the first half," said the game announcer in 1952.

In just that game, Vessels gained 195 yards on 17 carries and scored all three OU touchdowns.

"Now watch the brilliant Mr. Vessels strike like lightning, on a neat cut back, the hard running speedster heads for the sidelines, breaks clear and streaks for 44 yards to rack up his third touchdown of the game."

Although Oklahoma lost the game, Vessels won over Heisman voters.

"Billy Vessels, it is my great honor as President of the Downtown Athletic Club of New York to present to you, the Heisman Memorial Trophy for the most outstanding football player for 1952."

"He was notified he had won the Heisman, and had to ask somebody 'what's that? What's this Heisman thing?'" Dean said.

"I certainly appreciate this great honor in receiving the Heisman Trophy for 1952."

In a different era, with different styles of offenses - not as flashy as today's high powered attacks, Vessels was impressive that Heisman winning year. His 1952 season included 1,072 rushing yards, 209 passing yards, and 18 touchdowns.

"Those kinds of numbers are absolutely eye popping for that era, for the early 1950s," Dean said.

Not only did Billy Vessels win the Heisman trophy for his sensational senior year as a Sooner, he also in many regards, unknowingly changed the future of college football.

And the futures of players yet to come, like 1969 Heisman winner Steve Owens.

"When I was growing up, Billy was my hero, he was the kind of player I wanted to be like," said Steve Owens, 1969 Heisman winner.

Dean thinks Billy Vessels was a change agent for college football and America's perception of college football, and helped to pioneer more potent, high powered offenses that would come later as the game evolved.

If you talk to the most recent Heisman trophy winners, they would look back at Billy Vessels as the guy who started it all, who made it possible, who created the kind of football that they excelled at that helped them win the Heisman.