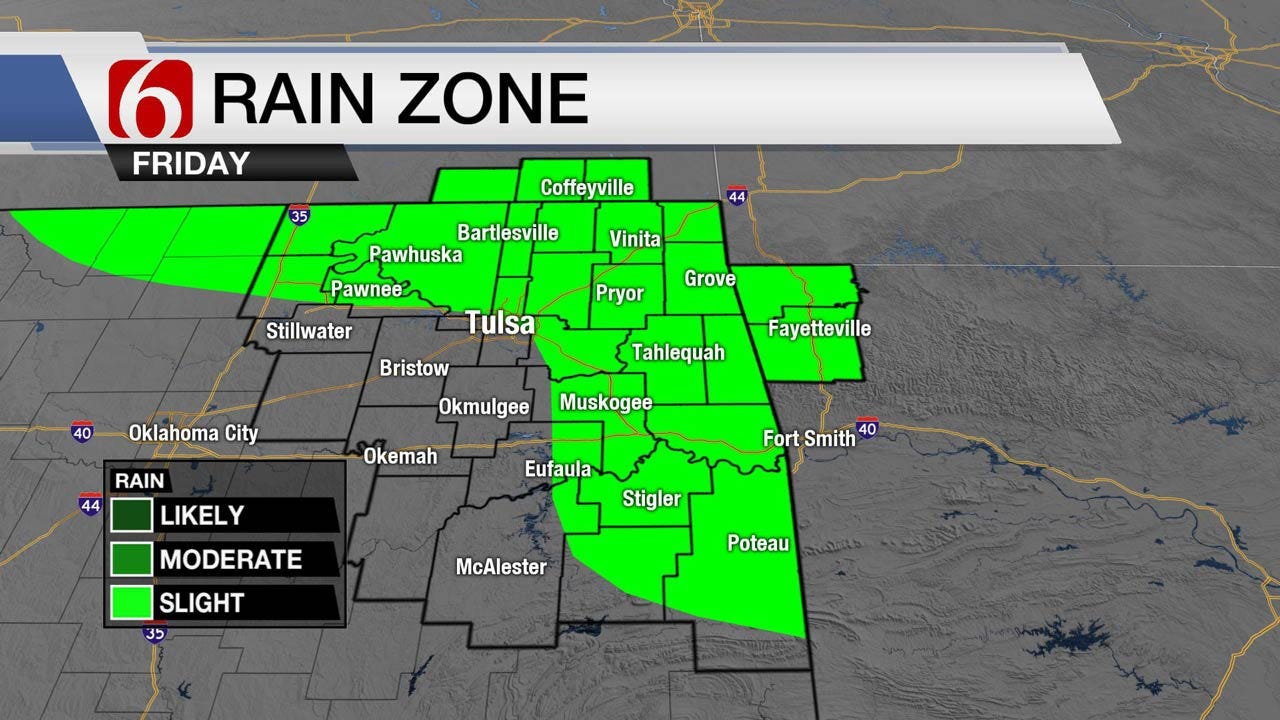 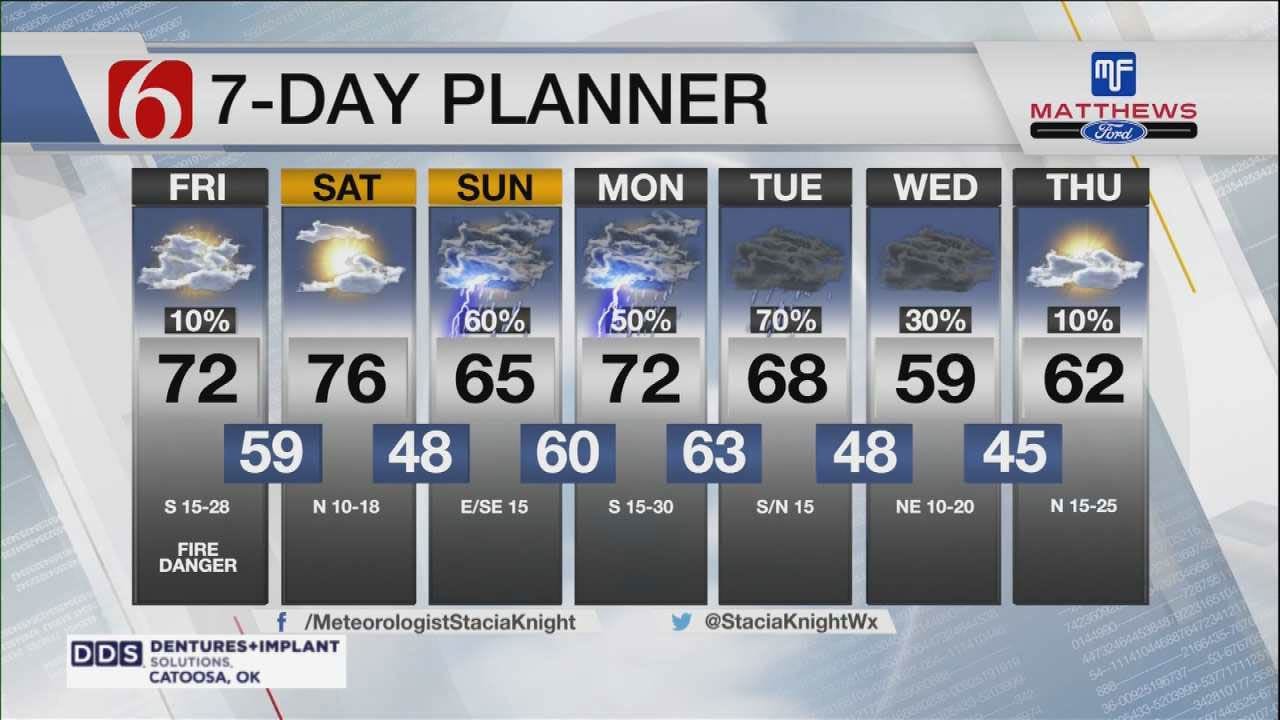 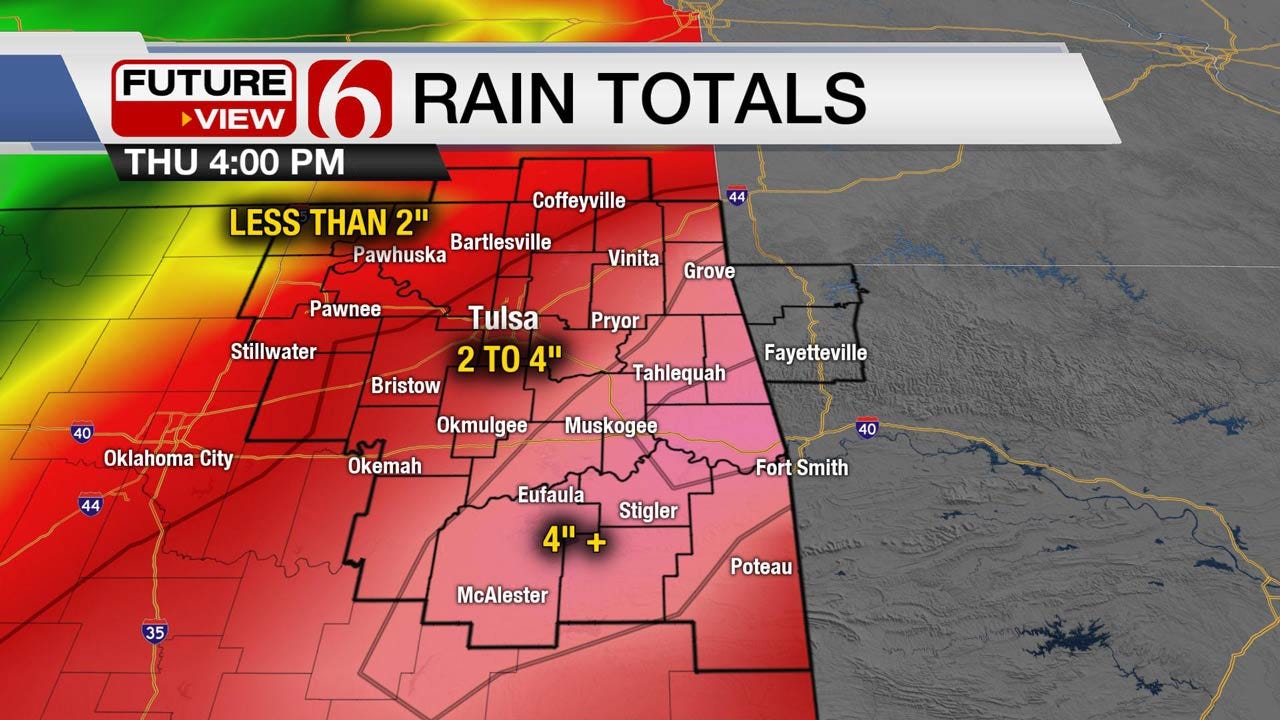 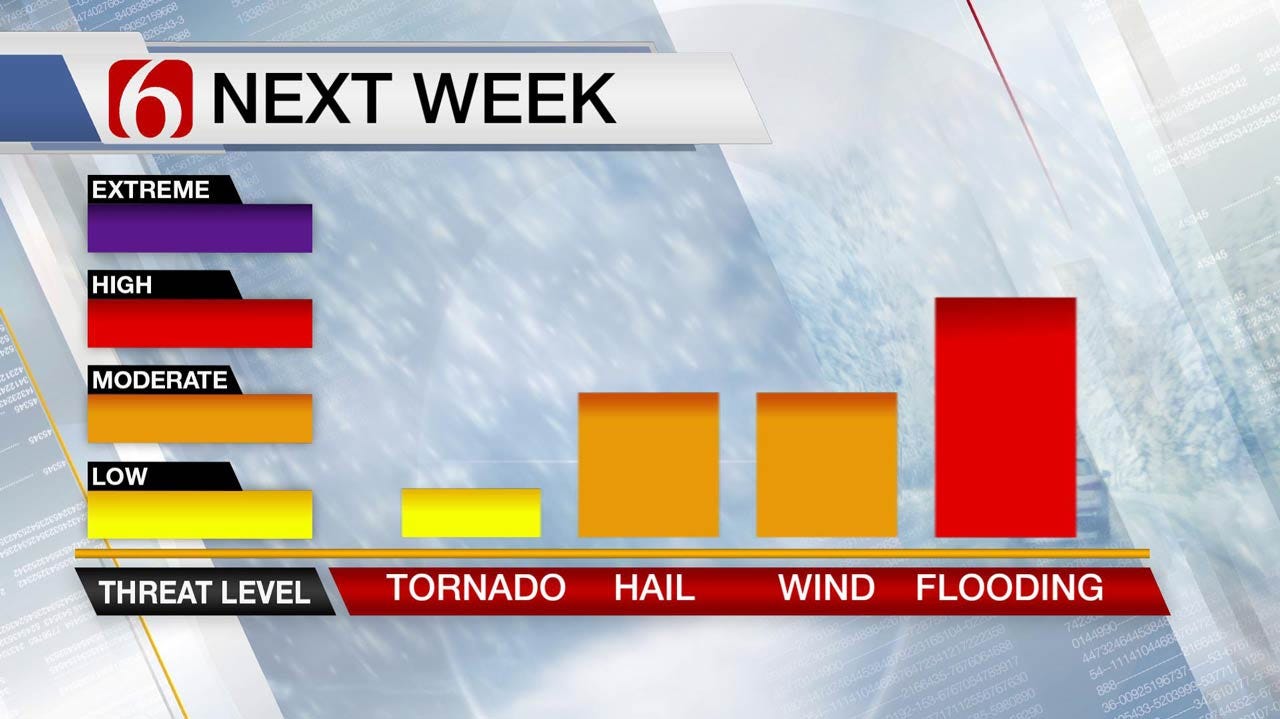 Temperatures this morning are in the 50s and 60s. Clouds will be increasing today which is a sign that low-level moisture is also increasing. By late this morning, we should see a stratus cloud deck moving up from the south. I'm expecting this cloud deck to stay intact for most of the day, keeping temperatures cooler than yesterday. If the cloud deck doesn't break apart then highs will be in the upper 60s and low 70s. If the cloud deck breaks apart and we get a little sunshine, then highs will be warmer. Fire danger is a concern today, despite the increase in moisture. It will be windy with dry fuels and fire spread rates will be around 150 feet per minute.We have a chance for a few showers today main north and east of Tulsa. A surface low will be across southern Kansas with an associated front draped across eastern Kansas and into some of Missouri and Arkansas. Since the best chance of rain will be closer to the boundary, we will miss out on most of the precipitation chances. Once a low-level jet gets stronger later today, that might also help squeeze out a few showers.

A cool front will move through tomorrow morning but despite a north wind, we'll still have warm highs in the upper 70s. You'll want to make your outdoor plans for Saturday this weekend. We should be dry and partly cloudy. There's a small chance for some patchy fog or drizzle in the morning. If we have fog develop Saturday morning, it would be in the low-lying areas and typically cooler spots across eastern Oklahoma. What does develop, would be gone by late morning.

A soggy 5 to 6 day stretch will start on Sunday. At the surface, another low will deepen over the Rockies and a warm front will lift north across the area. We'll have a batch of showers and storms move up with the front Sunday morning. In the afternoon, we could have some additional showers and storms. Strong to severe storms would be possible. The higher risk of severe storms is in central and western Oklahoma where the atmosphere is more unstable. The morning and early afternoon batch of rain might keep the atmosphere in eastern Oklahoma from de-stabilizing too much. We'll have to wait and see.

Scattered showers and storms will continue Sunday night into Monday morning. We'll remain in a zone favorable for scattered showers and storms. The atmosphere on Monday is expected to be unstable enough to support strong to severe storms. A dry line out west will be the focal point for afternoon convection and a higher risk of severe storms. A cold front will be moving down and getting ready to slide into Oklahoma by Tuesday. When the front moves in, an axis of heavy rain will set up. Tuesday could be a gully-washer day for many of us. The surface low and front will SLOWLY move south during the day so that means the axis of heavy rain will also slowly move south. If we have any strong to severe storms on Tuesday, it should be out ahead of the front where the environment might still be favorable.

In addition to surface lows and front moves in and out this week, a strong upper level system will move into the Pacific Northwest and start sending waves of upper level energy in our direction. These waves will enhance our shower and storm chances from Sunday through Thursday. We'll have a final round Wednesday and into Thursday before this system finally clears out. This last round looks to primarily impact southern and far eastern Oklahoma, so some areas north of I-44 could possibly start drying out. By Friday, most spots in eastern Oklahoma will have 2 to 4" of rain. Depending on the location of Tuesday's heavy rain axis and the third round Wednesday into Thursday, that will be the areas that would see higher totals.