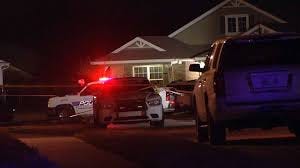 The OSBI says Owasso police shot and killed Duane Preciado after he refused to drop a rifle and a pistol while charging at them.

3/22/2018 Related Story: Man Dies After Being Shot By Police At Owasso Home

One neighbor said he saw the whole thing from his driveway.

Roger Reed watched the whole situation unfold from his driveway with his 15-year-old son at his side.

Reed and his son were in the garage getting ready for a fishing trip when he said he heard yelling.

He said officers were backing up towards their squad cars, commanding 39-year-old Duane Preciado to drop his weapon, while Preciado yelled back.

"That went back and forth for about 5 or 10 seconds and then they opened fire on him," Reed said, "he fell on the sidewalk here and he came over and the police did and tried to render first aid to him but I think he was gone pretty quick."

Reed said this situation is heartbreaking for everyone involved.

As a military veteran himself, he said after he learned about Preciado's time in the Air Force and his struggle with PTSD, he could relate.

Reed said there are a lot of veterans coming out of the service that need help and are too proud to ask for it.

"I just hope that Owasso and Tulsa and the surrounding communities use this as a wakeup call to do more for our veterans that need help," Reed said.

Once OSBI is finished with their investigation it will be up to the DA to decide if the shooting was justified.