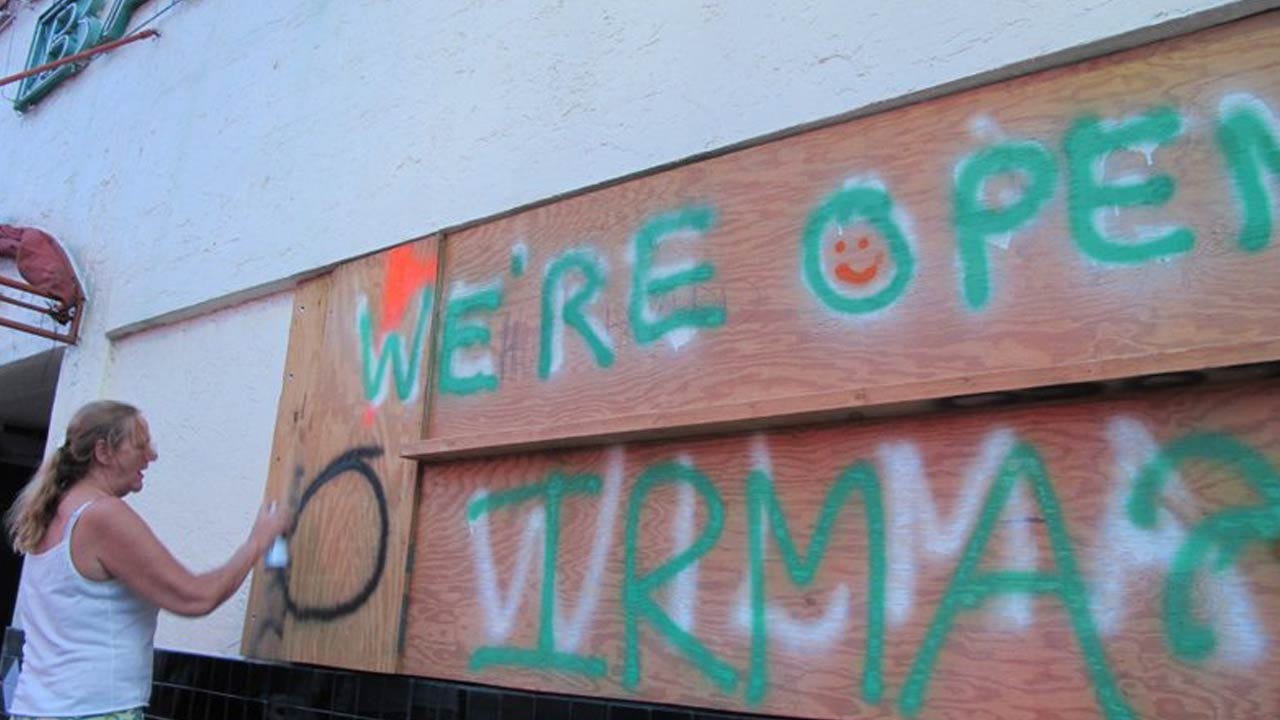 The National Weather Service said Saturday morning that damaging winds were moving into areas including Key Biscayne, Coral Gables and South Miami. Gusts of up to 56 mph (90 kph) were reported on Virginia Key off Miami as the storm’s outer bands arrived.

The center of the storm was about 245 miles (395 kilometers) southeast of Miami early Saturday as it raked the northern coast of Cuba.

The latest forecast track predicts the center of the storm will move along Florida’s Gulf Coast through Monday. All times are Eastern.

It added that Hurricane Irma is “one of the biggest natural catastrophes to have occurred in France in 35 years.”

The agency said affected residents have 10 days to make a claim starting from Saturday, when the status of a natural disaster was officially declared

France’s Director of Public Safety has held a press conference in Paris on the recovery efforts in the French overseas island territories of Saint Martin and Saint Barthelemy that are reeling from Hurricane Irma.

Jacques Witkowski said Saturday that “there are 1,100 people, both civilian and military, deployed on the islands” to help with recovery.

But he said they were also tasked with evacuation of residents ahead of another hurricane, Jose, which is expected to violently pummel islands in the Caribbean later on Saturday.

Witkowski said the eye of Hurricane Jose will pass close to the islands of Saint Martin and Saint Barthelemy.

The National Hurricane Center says Irma has weakened slightly to a Category 4 hurricane, as it moves over the Camaguey Archipelago of Cuba.

Irma had briefly regained Category 5 strength late Friday, but now has maximum sustained winds of 155 mph (249 kph). The hurricane is about 245 miles (394 kilometers) from Miami and moving about 12 mph (19.3 kph) toward the west-northwest.

In the Atlantic, Hurricane Jose is a Category 4 hurricane, about 190 miles (306 kilometers) east-southeast of The Northern Leeward Islands, moving toward the islands at 13 mph (20.92 kph) with winds reaching 150 mph.

In the Gulf of Mexico, Hurricane Katia made landfall late Friday north of Tecolutla, Mexico and weakened to a tropical storm. By early Saturday morning it was 135 miles (217 kilometers) south of Tampico, Mexico, moving sluggishly at only 2 mph (3.2 kph) near the Sierra Madre Mountains with maximum winds of 40 mph (64.4 kph). It was expected to weaken further throughout the day.

Dutch marines have dropped flyers from a helicopter warning beleaguered inhabitants on the devastated nation of St. Maarten to head to shelters as Hurricane Jose barrels through the Caribbean.

Jose, a Category 4 storm with 150 mph winds, was forecast to pass close to St. Maarten over the weekend, delivering a second damaging blow to the former Dutch colony that suffered catastrophic damage when Category 5 Hurricane Irma slammed into it on Wednesday.

Peter Jan de Vin, a Dutch military commander on the island of Curacao who is helping coordinate relief efforts on St. Maarten, tweeted a picture Saturday morning of a marine dropping flyers out of a helicopter flying low over one of St. Maarten’s shattered seafront neighborhoods.

The National Hurricane Center says the eye of Irma is moving over the Camaguey Archipelago of Cuba as a Category 5 hurricane.

The center says Irma made landfall there late Friday and has maximum sustained winds of 160 mph (257 kph). The hurricane is about 275 miles (443 kilometers) from Miami and moving about 12 mph (19.3 kph) toward the west.

In the Gulf of Mexico, Hurricane Katia made landfall late Friday north of Tecolutla, Mexico and weakened to a tropical storm, with winds reaching 45 mph (72.4 kph).

In the Atlantic, Hurricane Jose is a Category 4 hurricane, about 240 miles (386 kilometers)east-southeast of the Northern Leeward Islands, moving roughly westward at 14 mph (23 kph)with winds reaching 150 mph.

A newly strengthened Irma is taking aim at south Florida with 160 mph (257 kph) winds after battering Cuba and leaving more than 20 dead across the Caribbean, as another hurricane follows close behind.

Irma regained Category 5 status late Friday. Thousands of people in the Caribbean fought desperately to find shelter or escape their storm-blasted islands, and more than 6 million people in Florida and Georgia were warned to leave their homes.

Many residents and tourists were left reeling after the storm ravaged some of the world’s most exclusive tropical playgrounds, known for their turquoise waters and lush green vegetation. Among them: St. Martin, St. Barts, St. Thomas, Barbuda and Anguilla.

Irma threatened to push its way northward from one end of Florida to the other beginning Sunday morning.