Shower/Storm Chances for the Weekend. 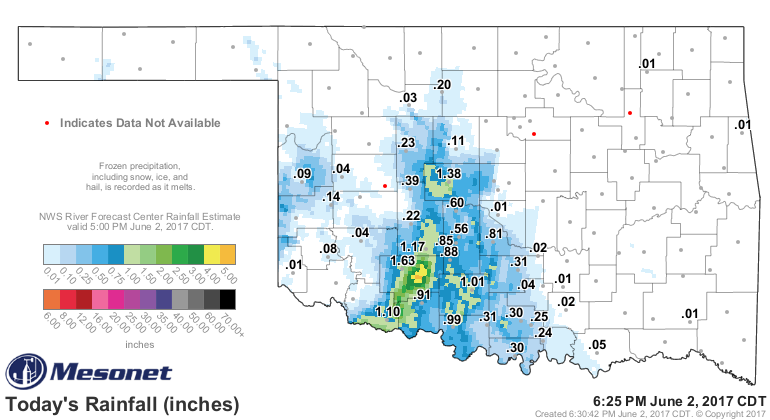 An upper level system has been meandering around far SW OK for the last few days and given the generally weak flow pattern aloft, its future is somewhat uncertain.  It has been responsible for producing some locally heavy rains over the SW part of the state as you can see on the rainfall map so far today, courtesy of the good folks at the OK Mesonet.  Since the flow pattern aloft is quite weak, it will likely meander around for another day or two and the problem is just how much of an influence it will have on our weather here in NE OK this weekend as so far we have been on the fringe of its circulation.  The latest/greatest data runs through the day today suggest it will drift a little more this way through Saturday and into the day Sunday before getting nudged further southward by the first of the week.

With that in mind, will maintain a likely chance of showers/storms along with mostly cloudy skies for Saturday and Sunday.  Keep in mind this does not mean everyone will get wet, but those showers/storms that do develop will be slow movers and therefore capable of dropping some heavy rains in a short period of time along with gusty winds, possibly some small hail, and dangerous lightning.  Given the upper level influence, there will be at least a possibility of overnight showers/storms, but the daytime hours should have the greatest chance; and anytime during the day at that.  As you can see on the QPF valid through Sunday, an inch or more of rain will be possible but keep in mind this is an areal average and some locations could end up with much more while others nearby receive much less.

The clouds and more widespread rains have had quite an impact on temperatures as well as you can see by the statewide max/min values today.  For Tulsa, today was actually somewhat below normal with a max/min of 84/62 as compared to the normal values of 84/64.

With clouds expected to persist through the night tonight along with at least a chance of showers/thunder by morning, look for temperatures tonight to generally be in the mid-upper 60s.  Little or no sunshine is expected for either Saturday or Sunday so our daytime highs both days will be near 80.   Winds will be very light and primarily from the SE Saturday, more from an E direction Sunday, and then more NE by Monday.

Also on Monday the pattern aloft is expected to amplify with a more northerly wind component which will act to move that upper level disturbance further south reducing its influence on our weather.  With that in mind, there may be some lingering showers/storms for the more SE counties but in general we should start to dry out with little or no mention of rain for the rest of the week.

Also the more northerly winds aloft together with a NE wind at the surface will bring drier air back over us but the air is not really much cooler.  That should result in generally fair overnight skies and with the drier air in place will also allow our nights to cool off rather nicely as you can see on our forecast page.  By the same token, we will have lots of sunshine during the day and at this time of year that means warm afternoon temperatures despite the more northerly winds.  By late in the week, our surface winds will return to a more southerly direction resulting in a warming trend along with partly cloudy skies, but still little or no mention of rain.

Shower/Storm Chances for the Weekend.