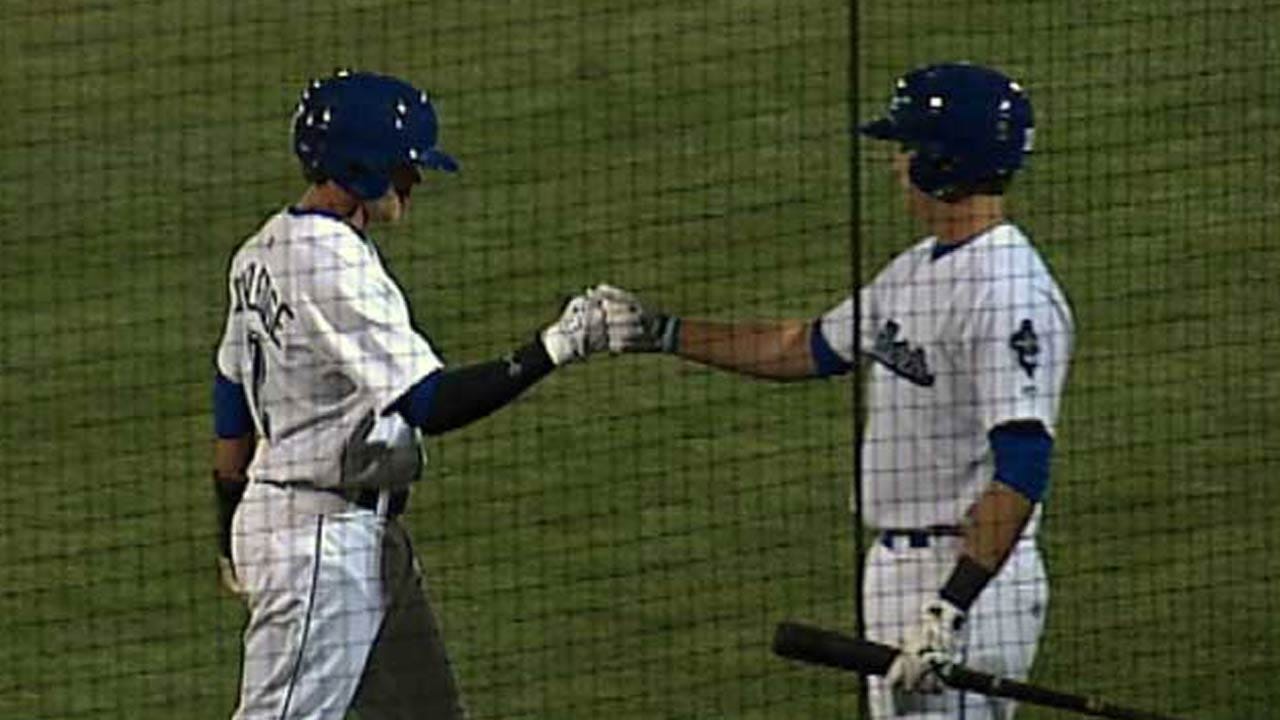 For almost seven innings Wednesday night, very few things seemed to go Tulsa's way as Springfield was up 7-0 going into the bottom of the seventh. But somehow, the Tulsa Drillers found a way to make an unbelievable comeback, scoring nine unanswered runs in the seventh and eighth innings to come-from-behind and claim the game, and the series, with a 9-7 victory at ONEOK Field.

It was a game of two halves for the Drillers as they found themselves trailing big after Springfield scored seven runs through the first five innings, while keeping Tulsa off the scoreboard. The second half of the game was nothing short of pure exhilaration and perhaps partial disbelief for the Tulsa fans as the Drillers completed their largest comeback of the year.

After a scoreless first inning, Bruce Caldwell gave Springfield the early lead. The Cardinals second baseman launched a two-run shot over the center field fence, just to the left of the hitter's eye, to put Springfield up 2-0.

The Cardinals added a run in the fourth before breaking out with a four-run outburst in the fifth. After seeing the first four batters reach against starter Deck McGuire, Razor Shines decided that his starter had run out of gas and called Jairo Heredia in from the bullpen with the score 3-0. The reliever struck out Jonathan Rodriguez for the first out of the inning, but the next two batters registered RBI singles to extend the Springfield advantage to 7-0.

Heredia settled down from there as he worked the next three innings without allowing a run. His efforts would prove pivotal for his club as the Tulsa offense finally broke through against Springfield in the seventh.

Springfield starter Andrew Morales, who allowed Driller baserunners in every frame except for the second inning, had somehow managed to keep Tulsa from crossing the plate. But the storyline changed as the Drillers were finally able to begin their comeback after the seventh inning stretch.

Yadir Drake began the comeback with a leadoff double before Brandon Trinkwon grounded a run-scoring single to center to break the shutout. It would not be the last time of the night that the second baseman would come up with a big hit. Following a fielder's choice groundout,

Ronald Torreyes smacked a double into left-center to score Adam Law. When the throw was sent home,

catcher to third beat him handily to the bag. But Torreyes pulled off a nifty slide, avoiding the tag and was correctly called safe. That would prove to be big as Peter Lavin and Lars Anderson each followed with RBI hits to pull the Drillers to within 7-4.Torreyes broke for third and it did not appear to be a smart decision as the throw from the

Following a scoreless top of the eighth inning, the Drillers got back to work in their half of the inning, this time against relievers Kurt Heyer and Chris Thomas.

Heyer had relieved Morales in the seventh inning but his night came to a close after Tulsa put men on first and second with one out in the eighth. Facing Thomas, with his team trailing by three, Trinkwon came through yet again, blasting the third pitch he saw for a three-run bomb over the right field fence to tie the game. The home run was the first of his Double-A career. Thomas then retired Law for the second out of the inning before

Torreyes extended the inning with a double. Lavin stepped up to the plate and rocketed a 2-0 pitch deep into the night for a two-run shot to complete the Driller comeback and put Tulsa in front 9-7.

Ryan Dennick came on for Heredia to pitch the ninth inning and set the Cardinals down 1-2-3 to record his first save of the season.

Heredia picked up his first win as a Driller thanks to his four innings of relief while Springfield reliever Thomas suffered a blown save along with his third loss of the year.

Although almost every starter recorded at least one hit, Torreyes, Lavin and Trinkwon led the Drillers at the plate, going a combined 7-13 with eight RBI on the night while accounting for five of the nine Tulsa runs themselves.

The Drillers will look to ride the momentum from their huge win into Thursday as they travel to Little Rock to begin a four-game set against the Arkansas Travelers. Tulsa will send Jeremy Kehrt (6-7, 3.50 ERA) to the hill where he will be opposed by Chris Ellis (4-1, 3.61 ERA) for Arkansas. The game is scheduled to start at 7:10PM.