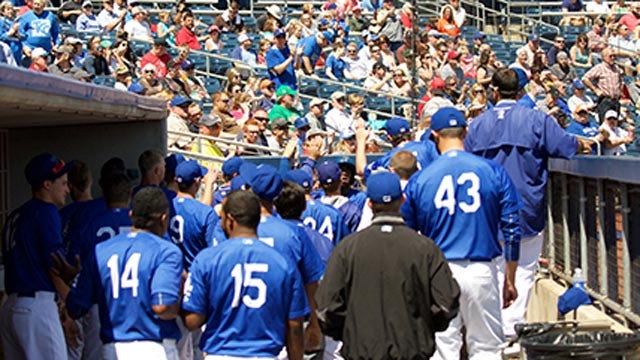 After seeing a 2-1 lead slip away in the bottom of the ninth, Tulsa could have easily thrown in the towel and rolled over. But the Drillers instead fought back, scoring three runs in the top of the tenth inning and then held off a Cardinals rally in the home half of the inning to secure a 5-2 victory at Hammons Field.

Tulsa starting pitcher Jharel Cotton, making his first start with the Drillers, combined with two relievers to limit Springfield to just one run going into the ninth inning. But one swing of the bat changed things in the bottom of the ninth as Patrick Wisdom launched a solo shot off Jacob Rhame to tie the game at 2-2. The home run for Wisdom was his fourth in his last eight games.

Batting in the top of the tenth, the first two Drillers were retired before Lars Anderson got the rally started with a double off the glove of the third baseman. Brian Burgamy then walked before Yadir Drake capped his big day at the plate by smoking a double over the center fielder's head to score both runners and put Tulsa back on top. Nate Samson followed with his second RBI knock of the night to score Drake and give the Drillers some insurance.

Springfield did not go quietly in the bottom of the tenth as they put runners on first and second against reliever Mike Thomas to bring their All-Star catcher Mike Ohlman up to the plate with one out as the potential tying run. Tulsa manager Razor Shines then went to his bullpen again to bring in Ralston Cash as the sixth Drillers pitcher of the night. Cash rewarded his manager's faith in him as he secured the win for Tulsa, getting the dangerous Cardinal slugger to ground into a game-ending double play for his first save of the season.

With the win, the Drillers improved their record to 3-5 in extra-inning contests this season.

The Cardinals used some small ball to open the scoring in the bottom of the first inning. After leadoff man Charlie Tilson worked a walk to start the inning, Mike O'Neill promptly moved him to second with a sacrifice bunt. Tilson advanced to third on a Nick Martini single before coming home on a sacrifice fly off the bat of Ohlman.

Ohlman, who has been one of the hottest hitters in the Texas League over the last month, picked up a base hit in the third to extend his Texas League leading hitting streak to eighteen games.

Springfield attempted to add a run in the third. After O'Neill smacked a one-out double, Martini again followed with a single to center. O'Neill attempted to score on the base knock, but Peter Lavin quickly fielded the ball and fired home to cut down O'Neill at the plate and keep the score 1-0. That play would prove crucial as the game progressed.

The score stayed 1-0 into the sixth as both starting pitchers settled in. But the Drillers seemed to solve Springfield starter Jimmy Reed in the sixth. Anderson led off with a walk and Drake advanced him to second with a base hit after a strikeout by Burgamy. Both Anderson and Drake moved up a base after a wild pitch from Reed and they both came in to score when Samson cracked a double to right field to give Tulsa a 2-1 lead.

Cotton really seemed to find his groove late as he struck out the side in the fourth and sixth innings respectively, flashing a 95 mph fastball mixed with a quality changeup. The hard throwing prospect finished his day with seven strikeouts over his six innings of work.

Jorge De Leon pitched the seventh and did his job, setting the Cardinals down 1-2-3 to keep the advantage with the Drillers.

After the Drillers went quietly in their half of the eighth, Jeremy Horst came on in the bottom half of the inning and worked around some trouble to toss a scoreless inning of his own before Wisdom sent the game to extras with his homer in the ninth against Rhame.

The Drillers were led at the plate by a trio of batters as Anderson and Drake each collected three hits in the contest while Samson came through with the two big hits with men on base to help push his team over the top.

The two clubs will continue their series in Springfield on Monday with Jose De Leon (1-2, 4.18 ERA) getting the start for Tulsa. Springfield has yet to announce a starting pitcher for Monday night's game. Fans can catch every pitch on AM 1430 The Buzz with first pitch coming at 7:10 p.m.