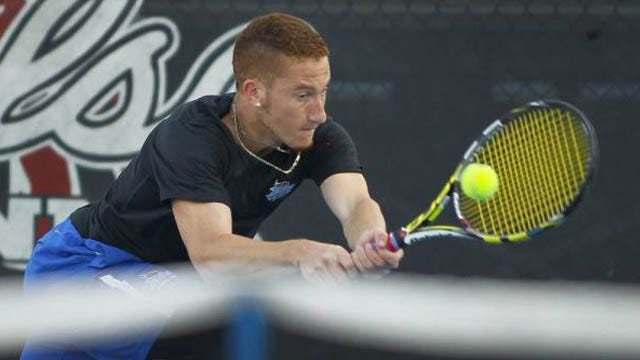 Sophomore Or Ram-Harel of the men's tennis program is set to begin his quest in the 2015 NCAA Division I Men's Tennis Singles Championships against Texas A&M's No. 47 Jeremy Efferding, on Wednesday, May 20 at 1:30 p.m., at the Hurd Tennis Center at Baylor University.

Ram-Harel enters the tournament as the No. 27th- ranked singles player in the Intercollegiate Tennis Association Poll. This season, as Tulsa's primary top singles player, he accumulated a 17-10 overall record, including a 13-8 mark in dual action.

Ram-Harel has been no stranger to ranked opponents this season, as he has a 6-6 record against the best the nation has had to offer. His signature win came against USC, when he was ranked number 71 in the country. Ram-Harel took down then No. 6 Yannick Hanfmann, convincingly, 6-3, 6-2, en route to TU's historic win over No. 1 Southern Cal.

Ram-Harel led the No. 30 Golden Hurricane to a second-round appearance in the NCAA Team Championships, before falling to eventual final four participant, TCU, 4-0. The Hurricane finished its season with an 18-13 record and achieved a high-ranking of No. 20.

On the other side of the court, Efferding, a senior from Boca Raton, Fla., finished the year with a 23-8 overall record, including an 11-3 mark in dual action. Efferding has won eight of his last 10 completed matches entering Wednesday's showdown with Ram-Harel. However, 10 of his last 12 matches have gone unfinished.

The senior led his No. 5 Aggies to a 24-5 record, and reached the final eight of the NCAA Team Championships. A&M fell 4-0 to a Virginia team who will play for an NCAA Championship on Tuesday, May 19, against No. 1 Oklahoma.