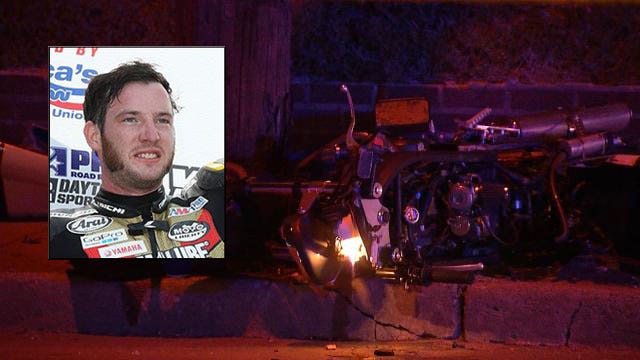 A professional motorcycle racer died in a crash in Tulsa Monday night.

Tulsa Police identify the man as Dane Westby, 28. Police say the wreck happened at about 8:25 p.m. on Peoria just north of 15th Street.

Westby was northbound on Peoria when his motorcycle left the roadway to the right, striking the curb, a concrete wall and then a utility pole, according to police.

EMSA took Westby to the hospital where doctors pronounced him dead.

A friend of Westby told News On 6 Westby was wearing protective gear.

According to his web site, Dane "The Wolverine" Westby raced superbikes for the Yamalube/Westby Racing team. He finished 3rd overall in points in the American Motorcycle Association Pro Daytona SportBike season last year.

He won his first race at age 7 at Hallett, Oklahoma and began road racing in 2003, according to his biography.

He rode a bicycle from Tulsa to Daytona International Raceway earlier this month and drove the pace car for the 2015 Daytona 200.

According to roadracingworld.com, he's survived by his father, former AMA superbike racer Tryg Westby, his mother, Jane and sister, Scarlett, as well as his girlfriend, fellow racer Patricia Fernandez.

The site says Westby was riding a Honda Hawk street bike to his parents' house when the crash happened.