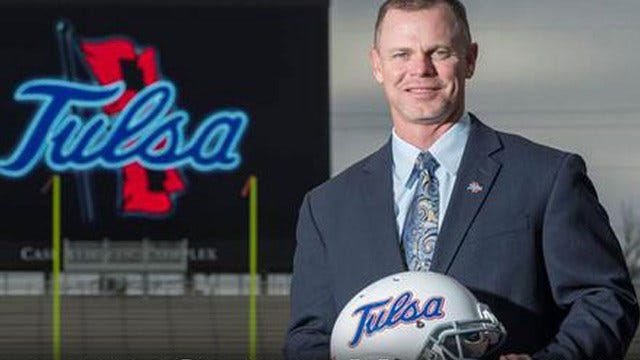 The pair both came from Bowling Green State University, where they served as assistant offensive coordinators. Under the pair's guidance, the offense at BGSU gained 432.9 yards, ranking 42nd for total yards nationally this year. BGSU also dished a loss to South Alabama this past weekend, winning the Camellia Bowl Championship in Montgomery, Alabama. The Camellia Bowl is a postseason game that matches up the Sun Belt against the Mid-American Conference.?

2014 was the first season for the two at BGSU, before taking their positions with the Golden Hurricane. Gilbert also spent two seasons at Eastern Illinois, prior to BGSU. While there, he was named FootballScoop's FCS Coordinator of the Year in 2013. He was recognized for the award, because his team went 12-2 and led the FCS in total offense, averaging 589.5 yards per game. His quarterback also received national player of the year honors. Under Gilbert, Jimmy Garoppolo received the 2013 Walter Payton Award, (the FCS equivalence to the Heisman).

Mattox started his coaching career at the University of Houston under Art Briles. In 2005 he first worked as an assistant strength coach, and then as a graduate assistant the following year. He also served at Eastern Illinois prior to BGSU. While there, he helped the offensive line accumulate over 8,000 yards in 2013, including over 5,000 passing and over 3,000 rushing. Before Eastern Illinois, Mattox spent six years as an offensive line and tight ends coach at junior college ranks. During one of his seasons at Coffeyville Community College, he had five offensive players take home All-Conference honors. His offense averaged 370 yards and 28.8 points per game.

“I'm definitely excited for the opportunity to join Coach Montgomery's staff at Tulsa. He's done such great things, not only at Houston, but again at Baylor," stated Mattox. "I've known coach Montgomery since 2003, when he first arrived at Houston with Coach Briles. Having the opportunity to know him when I was a player, then to be a student coach and a graduate assistant coach with him was a great experience as I began my coaching career.”

“Both Sterlin and Matt have experience within our offense. They speak the same language that I speak. We see the same things on tape and know exactly how we want to plug in the offense,” stated Montgomery. “Both of these guys bring a vast amount of knowledge. Both are very passionate and hard-working guys that will do right by our student-athletes, and push them in the direction we want them to go. They've been very successful on the collegiate level. I'm excited to have both Sterlin and Matt join our staff at The University of Tulsa.”