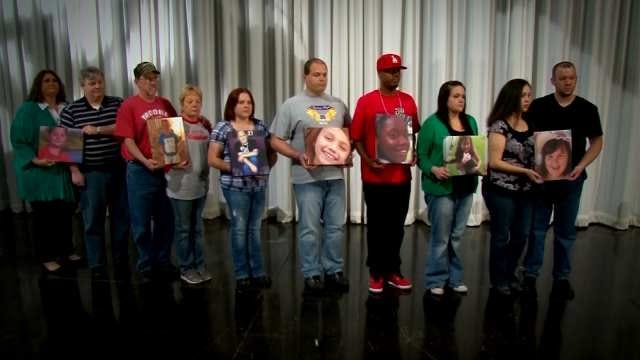 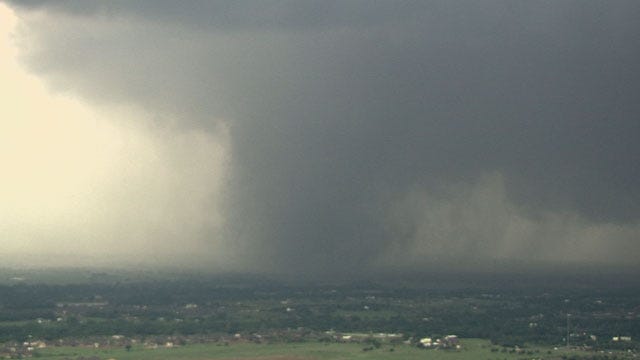 On May 20th last year, seven precious children died when a tornado ripped through Plaza Towers elementary school. Recently, all seven families got together and spoke about it. They open up about that day, how they say the city failed them, and how the community embraced them.

"She was so goofy and random, and she was always in a good mood no matter how bad things were," Jimmy Rossen said.

Kristi Conatzer said, "She had a really big laugh and a chipmunk giggle."

"She had a big smile," Joshua Hornsby said. "She'd walk around singing all the time."

"She'd have fun everywhere, even when she wasn't supposed to be," said Dan Angle.

Mikki Davis said, "Kyle played soccer since he was four, and just seeing him on the field, giving all he has, having fun, living life."

Scott McCabe said, "He loved life, he never met a stranger. He was just a beautiful boy."

Seven families, all connected by one horrific day, May 20th 2013.

"I was the first on the site that day. I went around the back of the school to where the class was buried, and I started digging like there was no tomorrow," Rossen said. "The police commander grabbed me by both arms and said ‘buddy you need to stop digging. The rest of this structure going to come down, I can't let you dig anymore.' I remember yelling at him, ‘come on Skip, you gotta let me dig, my little girl's in there.' He grabbed me by both arms, tears rolling down his face. He said, ‘buddy I got to put you behind the line, I can't let you dig anymore.'"

Jimmy Rossen's daughter, 9-year-old Tonie Candelaria, was somewhere in the rubble at Plaza Towers Elementary School. So were six other children, including Mikki Davis's son, Kyle.

"I was still hopeful when I got to the school, but when I walked around the corner and saw the school, my heart dropped dead because I knew it wasn't looking good at all," Davis said.

"Every dad wants to be a hero for his little girl, and I failed," Dan Angle said.

His daughter, Sydney, was also among the missing, along with Nicolas McCabe, Janae Hornsby, Christopher Legg and Emily Conatzer. What followed was hours of searching not knowing where to turn for answers.

When asked what the city and community should do differently, they all had answers.

"Get their act together," Stacey McCabe said.

Even though no one could tell him for sure, Scott McCabe knew in his heart one of the bodies they brought out, was his son, Nicholas.

"I sat on the hot water tank and I could see the hallway, or what was supposed to be the hallway, and I saw them bring a little boy out and it was about 6:30 or 7:00."

Rescuers pulled all seven of the children out from underneath a wall, but all of the parents say they didn't find out until the next day their child had died.

"No one was with us as they told us on the phone," Danni Legg said.

"Don't get me wrong, calling people, telling them their child is gone, nobody want's that job, nobody. But the way they handled it, it was unprofessional," said Jimmy Rossen.

The Medical Examiner said it's up to the police to notify the next of kin, and Moore Police say that didn't happen this time. Although there is some disagreement as to what did happen, both agencies have made changes for future disasters.

When asked what the hardest part for them has been, Ross Legg said, "From picking a casket it felt like I would never be able to pick him up because he'd always be there. Having them dress up and knowing that I never could undress him and count all ten finger and ten toes like daddy's do. It meant saying goodbye."

"Hearing people's judgment of us, So many people tell us to get over it. Move on. It's been months," Danni Legg said.

"For me, almost every day is hard because I live by myself," said Joshua Hornsby. "So when I go home, it's just quiet and it's just me and my thoughts."

"The hardest thing was signing the paper to bury your baby. It took me a while to sign it" Mikki Davis said.

Dan Angle said, "There's sometimes that I can see her smiling and I can see her playing and that makes me smile," Dan Angel said. "There some times, no matter how hard I try, I can't keep the image out of my head of my little girl being scared and crying as that building came down on her. She wanted someone to come and help and I couldn't."

"When we first saw Tonie at the funeral home, she had all these scratches on her arms, and I was holding her hand then I realized her hand was curved around mine like she was holding my hand," Brandi Candelaria said.

She said her daughter, Tonie, and Emily must have been holding onto each other; they were the best of friends. Emily's mom Kristi Conatzer noticed her daughter's hand, too.

"Hers looked like the same," she said. "While it's been comforting to know they were with each other in their last moments, it's been extremely difficult too. It doesn't make anything better."

While their minds are always on their children, they can't help but think about another storm season. The sound of a tornado siren has many of them nervous.

"I'm nervous. To be honest, I don't know how I'm going to react," Mikki Davis said.

Many of them have even considered moving away from Oklahoma.

"My wife and I are originally from Wisconsin. We moved to Oklahoma 11 years ago," Dan Angle said. "After the tornado, our knee jerk reactions were, ‘we need to get out of here and we need to go back to our family.' It didn't take me very long to realize this is home now."

He said that's because of how Oklahomans reacted after the storm. They've also found strength among each other.

They all know they want to make a difference.

"I want shelters in schools and I will keep fighting until it happens," Mikki Davis said.

Joshua Hornsby said, "It's a no brainer. It's something we need.

"May 20th was Moore's second chance. We knew May 3rd of '99 this could happen," Danni Legg said. "It blew away two schools and the promises were made that day by our district, by our community, were not followed through with."

"This is not political. It's common sense," Scott McCabe said.

"All we want is it on the ballot come November, period," Stacey McCabe said.

They said even if that doesn't happen, their fight will continue.

"We'll continue to fight until we have no more breath. Because these other people's kids matter to us," Stacey McCabe said.

Jimmy Rossen said, "We don't want to watch any other parents bawl and cry and weep over their children for something that could be prevented."

When asked how this has changed their perspective on life, Kristi Conatzer and Brandie Candelaria summed it up. They said cherish all of the little things, even the times you want to pull your hair out, embrace every moment.