Manning Finalist For National Coach Of The Year Awards 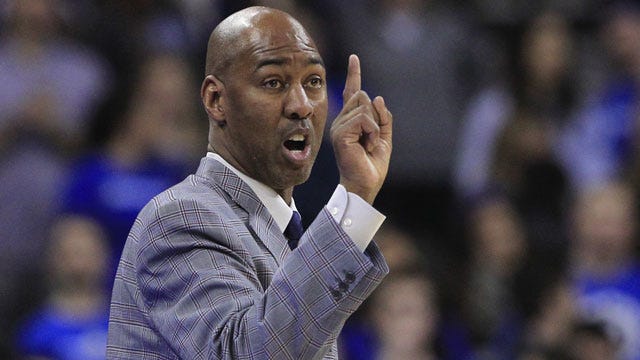 Second-year Tulsa head coach Danny Manning is named as a finalist for the 2014 Jim Phelan National Coach of the Year and the 2014 Ben Jobe Award, presented by CollegeInsider.com.

In just his second season as head coach of the Golden Hurricane, Manning led Tulsa to the 2014 Conference USA regular season and tournament championships, and its first NCAA Tournament appearance in 11 years. TU went 13-3 in league play to capture a share of its first regular season league title since 2002, and its first conference tournament championship since 2003. The Hurricane completed the season with a 21-13 overall record.

Tulsa ended the season winning 17 of its last 21 games, including 11 in a row entering the NCAA Tournament. TU played nine of its final 13 contests on the road, and won eight of its final nine road- or neutral-site games to end the season. The Hurricane started the season 1-6 and rebounded from a 4-9 record through December after playing a difficult non-conference schedule that ranked 64th in the nation.

The Jim Phelan National Coach of the Year award is named in honor of Jim Phelan who coached his entire 49-year career at Mount Saint Mary's University, compiling a record of 830-524. He led the Mountaineers to the 1962 NCAA Men's Division II Basketball Championship.

The Ben Jobe Award is named in honor of Ben Jobe, an icon at Historically Black Colleges and Universities. He is best known as the head coach of the Southern University, a position he held for 12 seasons. He was also head coach at Alabama A&M, Alabama State, Talladega, Tuskegee and South Carolina State. He compiled a 209-141 record at Southern, and guided the Jaguars to 11 SWAC titles and four NCAA Tournament appearances.

Manning Finalist For National Coach Of The Year Awards