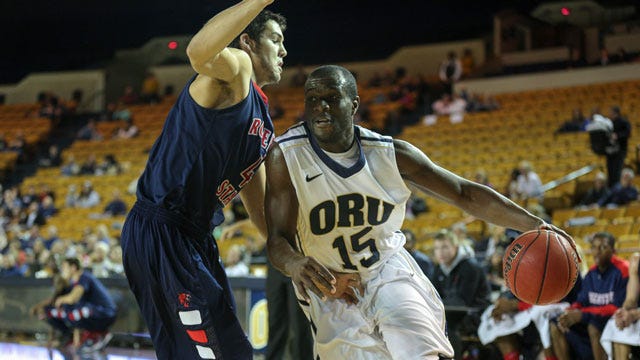 A late first half run gave the Oral Roberts men's basketball team the momentum and the Golden Eagles carried it through into a dominant second half en route to an 82-59 victory over Southland Conference newcomer Abilene Christian Thursday night at Moody Coliseum.

The Golden Eagles shot 60 percent from the floor in the second half and got at least two points from 10 different players in that half alone. Shawn Glover led the way for ORU with 25 points, while Korey Billbury added 13 points. ORU out-rebounded the Wildcats 34-23 and used it to a 19-4 advantage in second-chance points

ACU was led by Julian Edmonson's game-high 26 points, including a 10-for-10 mark from the free throw line.

ORU took an early 5-2 lead after a 3-point play by Bobby Word, but then fell victim to an 11-0 ACU run that gave the Wildcats their largest lead of the half at 13-5.

The Golden Eagles would not stay down long and rattled off a 10-0 run of their own to re-take the lead at 15-13.

A battle for the rest of the half, ORU trailed by as many six, but scored the last six points of the half to tie the game at 39-39 on a Glover jumper as time expired.

The second half was all ORU as the Golden Eagles put together extended runs, including a 10-0 spurt, and out-scored ACU 20-4 to start the second half, opening a 59-43 lead.

ORU would continue to pull away and led by as many as 24 late in the game to earn the Southland Conference road victory.

ORU's road trip will continue at Incarnate Word on Saturday at 4 p.m.