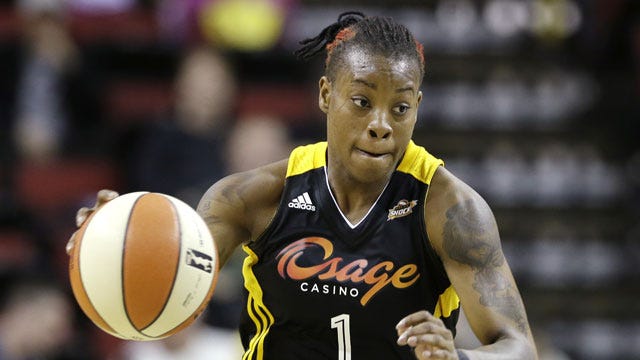 Riquana Williams of the Tulsa Shock was named the WNBA's Western Conference Player of the Week for games played Monday, Sept. 2 through Sunday, Sept. 8.

Williams capped her week by scoring a WNBA-record 51 points in San Antonio on Sunday. For the week, she led the league in scoring with 34.5 points per game and tied for first in free-throw percentage, converting all 13 opportunities from the charity stripe. This marks her first Player of the Week honor.

Williams' record-setting game to beat San Antonio featured 17-for-28 shooting from the field including 8-for-14 from three-point land. She scored eight points in each of the first two quarters before erupting for 20 in the third and 15 in the fourth as the Shock emerged victorious by a 98-65 final score. The 51-point effort surpassed the previous mark of 47 set by Phoenix's Diana Taurasi in 2006 and Seattle's Lauren Jackson in 2007. Two days earlier, Williams scored 18 points while pulling down seven rebounds in a losing effort to Los Angeles, 74-70.

The Shock have two games remaining this season, both against the Seattle Storm. First up is a home contest at 7 p.m. on Thursday.