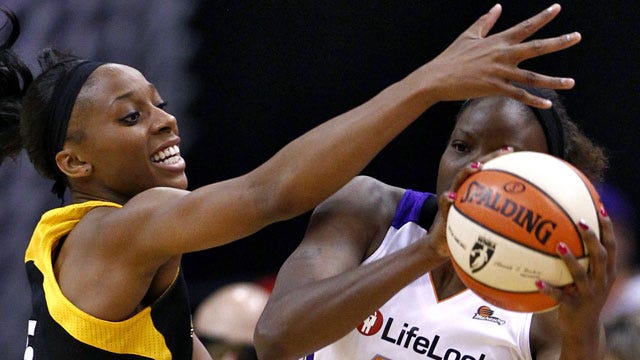 The Shock might have lost on Tuesday night but it did its best to make things interesting in the late stages of the contest.

Tulsa trimmed Phoenix's 13-point lead to just two points twice in the final 15 seconds but the Mercury rose to the challenge, holding off the Shock from the free-throw line to preserve an 89-86 victory.

Phoenix's Diana Taurasi had 28 points and 10 assists, while Candice Dupree added 20 points and 10 rebounds to lead the Mercury. Brittney Griner also chipped in 15 points, 10 boards three blocks to lead Phoenix to its third win against the Shock in 11 days.

Tulsa was led by Riquna Williams' 23 points, while Liz Cambage added 21 points and 13 rebounds and Tiffany Jackson-Jones chipped in 13 points for the Shock, who fell to 8-18 on the season.

The Shock led by three at halftime but Phoenix (14-12) outscored Tulsa by 12 in the third quarter and also went on a 9-0 run in the fourth to keep the Shock at bay before a late comeback attempt fell short.

The Shock will try to snap a three-game losing streak when it hosts San Antonio on Friday at 7 p.m.