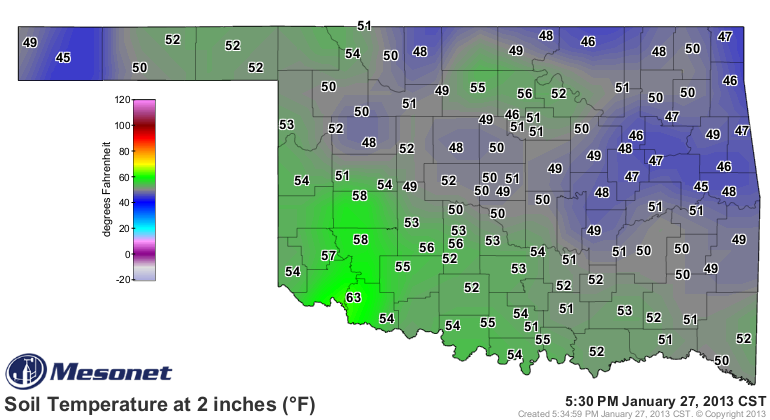 Still monitoring the rainfall potential as shown by the updated QPF map on the right. Data so far today has been consistently indicating as much as an inch or so of rain will be possible for some portions of E OK on Tuesday, but there will also be a rather tight W-E gradient. This suggests that the location of storm initiation during the day will have a great deal to do with how much rain any particular location winds up receiving. The more eastern locations obviously stand the best chance of some decent rainfall and the more western locations will be on the fringe.

Also, as the storms develop during the day Tuesday, the wind flow at the surface and aloft suggests these storms will quickly form into a squall line which will move rapidly eastward. This will limit the rainfall totals for many locations, but a squall line would also provide at least some rain for just about everyone. So, the chances of any one location receiving at least some rainfall are looking pretty good right now. The presence of a squall line and the dynamics associated with it suggest the potential for damaging straight line winds so there will also be a severe threat. Small hail may also occur although the instability looks rather marginal at this time.

Between now and then, our skies will be pretty much overcast with gusty southerly winds maintaining very mild conditions. Those winds are bringing the warm, moist air into the state with dew point temperatures generally running well into the 50s. Notice the second map on the right which shows the 2 inch soil temperature as of late this afternoon. Since the soil is much cooler than the dew point, there will likely be condensation form on the pavement and walkways tonight so don't be surprised if there are wet spots even though it may not have rained. This combination will also produce some patchy fog overnight and keep temperatures very mild.

In fact, we will be close to setting records for warm overnight lows tonight and again Monday night as temperatures will only be dropping into the 50s or lower 60s. Daytime highs on Monday will be limited by the cloud cover and a few light showers, but should still reach the 70s. Tuesday will start off very warm, but will end much cooler as the cold front should be arriving during the afternoon/evening hours. The showers/storms along and ahead of the front will also limit the warm-up so look for temperatures to generally be in the 60s until the winds shift to the NW behind the cold front.

Wednesday morning should start off in the 30s and there may be some lingering light precipitation, particularly for the more northern counties first thing in the morning; some of which may be of a wintry mix. This is not expected to amount to anything and skies should become partly cloudy during the day with gusty NW winds and temperatures only reaching the 40s. More seasonal temperatures are then expected for the rest of the week with a gradual moderating trend over the weekend. It also looks to be dry for the rest of the week although there will be several weak systems moving through the state and shifting the winds around. These systems will be moisture starved though.