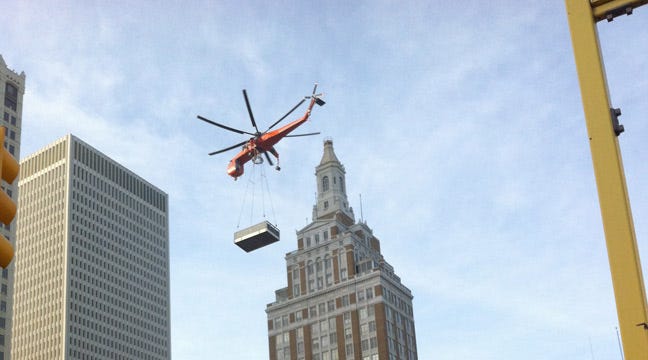 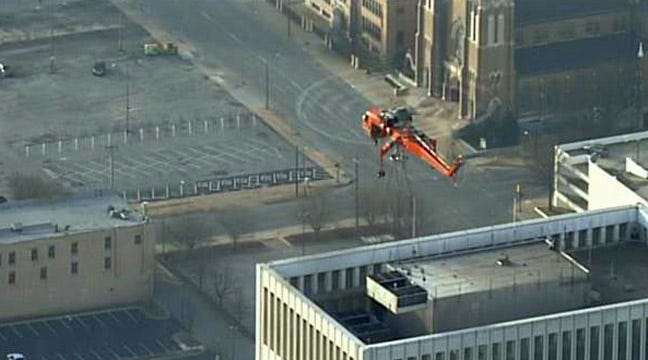 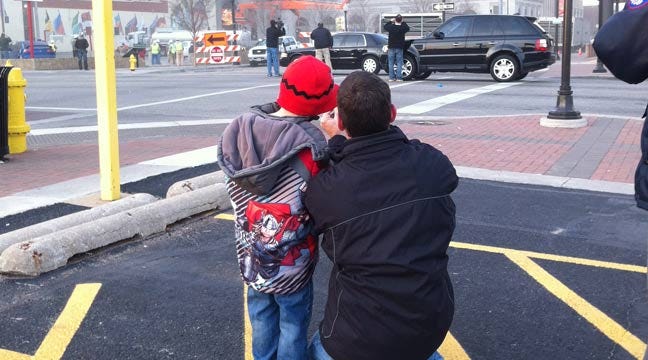 Dozens of Tulsans got caught staring as an enormous skycrane dropped into the heart of downtown.

Streets were closed and buildings near Third Street and Boston Avenue were evacuated when the chopper performed a high-flying airlift operation.

The chopper flew in to Tulsa to lift cooling units to the roof of a downtown building.

The helicopter is specially modified to be able to handle heavy equipment.

And it was just big enough and loud enough to draw in a crowd to watch the excitement.

"We've seen a lot of helicopters, but nothing like this one," Tulsan Patty Costner said.

The chopper came roaring in to town Saturday morning.

The power behind its 72-foot rotor blades kicked up dirt and dust and surprised downtown residents, Tom and Patty Costner.

"We looked out the window and there was a helicopter going right on top of a building," Tom Costner said.

The skycrane made six trips to the top of First Place Tower, carrying four 13,000-pound sections of air conditioning equipment and two loads of pipe.

The building is more than 500-feet tall, which is too high for a traditional crane to do the heavy lifting.

The whole procedure only lasted about 30 minutes.

The pilots made it look easy.

"It's kind of like flying a video game," Harrold said. "Pretty basic operation for what we do, we do a lot of these construction jobs all over the world.

Harrold was manning of the cockpit's third seat in the back.

Once the two front pilots positioned the chopper over the equipment, Harrold took control.

Then the ground crew secured the load... and up it went.

A very precise and strategic operation, with no room for error.

"These loads line up within inches or fractions of an inch," Harrold said.

But with nearly two decades of experience and cooperative Oklahoma weather, the unique operation went off without a hitch.

The Erickson Sky-Crane uses up about 500 gallons of fuel per hour.

So that half hour of flying added up to about $1500 in fuel costs.