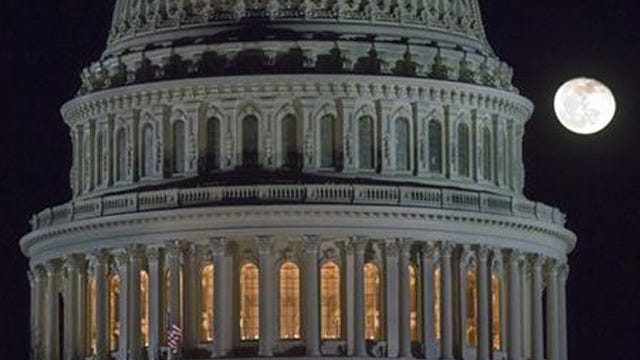 Agonizingly close to a New Year's Eve compromise, the White House and congressional Republicans agreed Monday to block across-the-board tax increases set for midnight, but held up a final deal as they haggled away the final hours of 2012 in a dispute over spending cuts.

The Senate on Tuesday approved a bill to prevent the nation from going over a January 1 "fiscal cliff." The legislation is now in the hands of the House, which is expected to vote on it Tuesday or Wednesday; if the House approves, it would go to the White House for President Barack Obama's signature.

The activity at both ends of historic Pennsylvania Avenue was remarkable as the White House and Congress struggled over legislation to prevent a "fiscal cliff" of tax increases and spending cuts.

As darkness fell on the last day of the year, Obama, Vice President Joe Biden and their aides were at work in the White House, and lights burned in the House and Senate. Democrats complained that Obama had given away too much in agreeing to limit tax increases to incomes over $450,000, far above the $250,000 level he campaigned on. Yet some Republicans recoiled at the prospect of raising taxes at all.

A late dispute over the estate tax produced allegations of bad faith from all sides -- but no swift compromise.

Senator Jim Inhofe voted in favor of the deal but says: "I do not agree with the deal's extension of unemployment benefits for another year or that it only achieves a small deficit reduction.

"I look forward to negotiating more spending cuts when we deal with the debt limit increase."

"While this bill is far from perfect, it does prevent massive tax increases while making tax cuts permanent for 99 percent of Americans," said Senator Tom Coburn.

"Congress and the president, however, have a lot of work to do to address our long-tern spending problem. Our debt – which is 120 percent of our economy if you count federal, state and local debt – is still the greatest threat to our national security. We will never address that threat until Congress and the president acknowledge that the only way to save entitlement programs is to change them."

Senate Republican leader Mitch McConnell -- shepherding final talks with Biden -- agreed with Obama that an overall deal was near. In remarks on the Senate floor, he suggested Congress move quickly to pass tax legislation and "continue to work on finding smarter ways to cut spending" next year.

The White House and Democrats initially declined the offer, preferring to prevent the cuts from kicking in at the Pentagon and domestic agencies alike. Officials said they might yet reconsider, although there was also talk of a short-term delay in the reductions.

While the deadline to prevent tax increases and spending cuts was technically midnight, passage of legislation by the time a new Congress takes office at noon on January 3, 2013 -- the likely timetable -- would eliminate or minimize any inconvenience for taxpayers.

For now, more than the embarrassment of a gridlocked Congress working through New Year's Eve in the Capitol was at stake.

Economists in and out of government have warned that a combination of tax hikes and spending cuts could trigger a new recession, and the White House and Congress have spent the seven seeks since the Nov. 6 elections struggling for a compromise to protect the economy.

Even now, with time running out, partisan agendas were evident.

Obama used his appearance to chastise Congress, and to lay down a marker for the next round of negotiations early in 2013 when Republicans intend to seek spending cuts in exchange for letting the Treasury to borrow above the current debt limit of $16.4 trillion.

"Now, if Republicans think that I will finish the job of deficit reduction through spending cuts alone -- and you hear that sometimes coming from them ... then they've got another think coming. ... That's not how it's going to work at least as long as I'm president," he said.

"And I'm going to be president for the next four years, I think," he added.

Officials in both parties said agreement had been reached to prevent tax increases on most Americans, while letting rates rise on individual income over $400,000 and household earnings over $450,000 to a maximum of 39.6 percent from the current 35 percent. That marked a victory for Obama, who campaigned successfully for re-election on a platform of requiring the wealthy to pay more.

Officials said any agreement would also raise taxes on the value of estates exceeding $5 million to 40 percent, but a late dispute emerged on that point as well as on spending cuts. Democrats accused Republicans of making a 11th-hour demand to have the $5 million threshold rise each year to take inflation into account. GOP officials said the White House had agreed to the proposal on Sunday night, a claim administration officials disputed.

Any compromise was also expected to extend expiring jobless benefits for 2 million unemployed, prevent a 27 percent cut in fees for doctors who treat Medicare patients and likely avoid a near-doubling of milk prices.

Much or all of the revenue to be raised through higher taxes on the wealthy would help hold down the amount paid to the Internal Revenue Service by the middle class.

In addition to preventing higher rates for most, any agreement would retain existing breaks for families with children, for low-earning taxpayers and for those with a child in college.

In addition, the two sides agreed to prevent the Alternative Minimum Tax from expanding to affect an estimated 28 million households for the first time in 2013, with an average increase of more than $3,000. The law was originally designed to make sure millionaires did not escape taxes, but inflation has gradually exposed more and more households with lower earnings to its impact.

To help businesses, the two sides also agreed to extend an existing research and development tax credit as well as other breaks designed to boost renewable energy production. Details on those provisions were sketchy.

Sen. John McCain of Arizona they would "clearly antagonize members of the House."

There was no response from Speaker John Boehner, who has been content to remain in the background while McConnell did the negotiating.

Some Democratic officials said that with his comments, Obama was hoping to ease the concerns of liberals in his own party who feared he had given away too much in the current round of talks over taxes.

Similarly, the pending agreement on the estate tax would allow more large estates to escape taxation than many Democrats prefer.

By late afternoon, the two sides remained separated by a stubborn dispute over spending cuts scheduled to take effect on the Pentagon and domestic programs alike.

Officials familiar with the talks said the White House has been seeking agreement to stop the cuts from taking effect, either for a period of months or a year, and wanted to count higher taxes created elsewhere in the legislation to offset the cost.

Republicans have said they are willing to delay the across-the-board cuts, but only if Obama and Democrats agree to targeted savings from government programs to take their place.