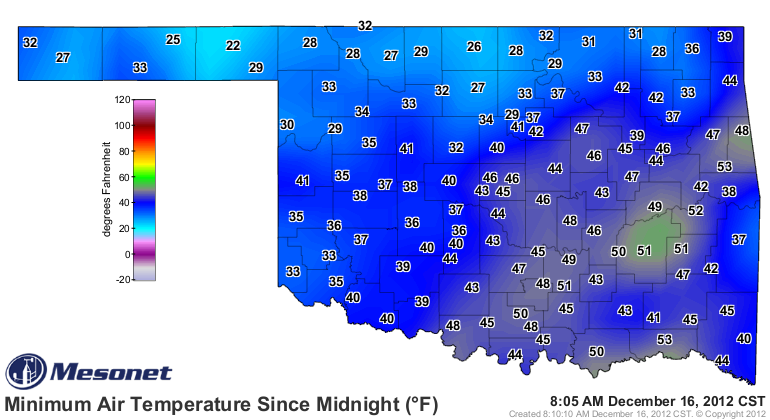 As you can tell from the morning lows plotted on the map to the right, there was quite a gradient across the area early this morning. That was due to a rather thick cirrus deck that persisted basically along and south of the I-44 corridor. This kept temperatures to the south much milder whereas temperatures to the north were much cooler. This cirrus deck should continue to thin out during the day with mostly sunny skies as a general rule. Also, a weak boundary will be dropping southward with light S to SW winds gradually veering around to light NW winds by evening and a light northerly wind overnight. This will not have much of an impact on our sensible weather as daytime highs will still be in the 60s this afternoon.

Overnight lows tonight will be pretty much in the 30s across the board which is still well above normal for this time of year. A light northerly wind to start the day Monday will veer back around to a light SW wind by afternoon; with lots of sunshine it will be another very mild day with highs near 60.

Tuesday and Wednesday will also see temperatures running well above normal with daytime highs continuing in the 60s. That will all change with the next cold front which is still on tap to arrive during the evening or overnight hours on Wednesday. Gusty southerly winds ahead of the front will change quickly over to gusty northerly winds behind the front and temperatures will be dropping to near freezing to start the day on Thursday. Even though the skies will be rapidly clearing during the day Thursday, those strong northerly winds will make for a very raw day with afternoon temperatures only recovering into the low-mid 40s.

Wish I could say this was going to be a good rainmaker for us. But, as has been the case all season, most of the moisture will be further east and we will be left with only some scattered showers, possibly some thunder, and only about a 20% chance of any measurable rainfall. As the colder air moves in on the backside of the storm system Wednesday night, there may also be some light snow or flurries, particularly for the more northern counties and into Kansas. This is a rapidly moving system, so little or no accumulation is anticipated.

According to the calendar, winter officially arrives on Friday and we will have seasonal temperatures for a change. Morning lows in the 20s and daytime highs are expected to be near 50 under sunny skies and light southerly winds.

The weekend will see another weak boundary in the area, but no active weather and temperatures will be near to slightly above seasonal levels.

As for the Christmas Holiday period of Mon-Tue, the longer range guidance remains inconsistent and suggests at least the possibility of rain on either Monday or Tuesday, depending on which set of guidance you want to believe.