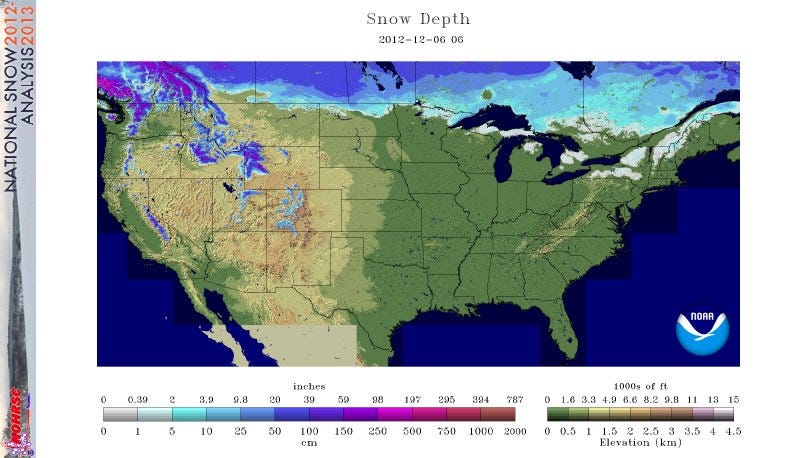 As the first map on the right clearly shows, we have enjoyed another very mild December day across the state. Keep in mind that our normal diurnal temperature range for this time of year here in Tulsa is 52/32 for the max/min respectively. These very mild conditions will persist right on through Saturday before a stronger cold front arrives on Sunday to bring what should be the coldest air of the season.

A weaker cool front will also be arriving on Friday, but it will not make much of a difference. Just lighter SE winds ahead of the front and a light NE wind behind it as it slowly sags southward across the state. We will also have more cloud cover for Friday and Saturday, but not much in the way of rain. A few isolated showers will be possible, primarily for the more eastern counties both days but the chances remain less than 20%. However, the cloud cover will have an impact on temperatures with our overnight lows in the 40s for the next few nights and our daytime highs near 60 on Friday and in the low-mid 60s for Saturday.

Then there is Sunday. A stronger cold front should be arriving first thing in the morning followed by gusty northerly winds and falling temperatures. If you look at the forecast, you will see that we have inverted temperatures for Sunday as the warmest time of day will be in the morning and it will be noticeably colder for the rest of the day. In fact, we could well see wind chill values in the teens and 20s by Sunday evening through the overnight hours. This pattern would suggest even colder temperatures than we are forecasting except for the fact there is practically no snow on the ground between here and Canada. Notice the second map on the right which shows the snow pack and the absence of any snow covered ground until you cross into Canada. Lots of snow up there so far, and some cold air to go along with it, but not much for the lower 48 as yet. Thus, the cold air has more opportunity to moderate as it plunges southward as it will be moving over relatively warm soils instead of a cold snow pack.

Speaking of snow, there will also be a chance of precipitation on Sunday, mostly in the form of a cold rain or a few showers, but amounts will be on the light side. It looks like drier air will be moving when the colder air aloft arrives so although there may be a brief wintry mix, no accumulation is anticipated. Also, the chances of any measurable precipitation at all are only about 30% and mostly for the more eastern counties at that.

After that, just cold for Monday and Tuesday as the coldest air of the season settles in. Temperatures will begin to rebound by the middle of next week, but we will still be dry. The change in the pattern aloft that will allow this colder air to move further south will also bring additional intrusions of colder air our way in the coming weeks. But, there is still no indication of a very wet system coming along to bring some relief to the ongoing drought situation.