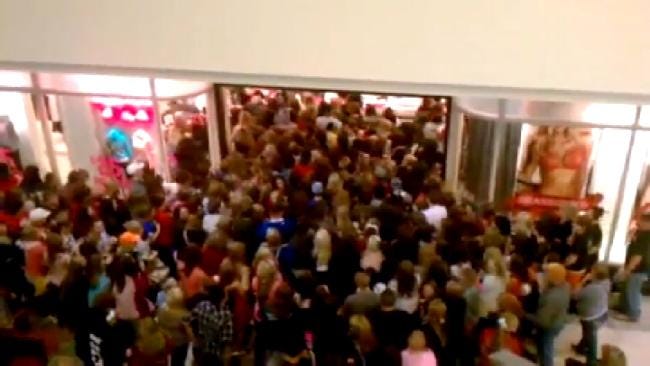 The fight for Black Friday savings turned into a frenzy in a Tulsa mall.

Shoppers swarmed the Victoria's Secret store just before midnight, creating mayhem, all for a discounted hoodie.

About 200 people were crowed outside the store. In a video uploaded to YouTube, you can see the moment the gates opened and shoppers rushed the store.

One woman, who was in the crowd, called the experience a "complete nightmare." She said people were pushing and shoving, stopping at nothing to get their deal.

That deal? A hoodie from the store's "PINK" line, which normally would cost about $60, was on sale for $25.

And on top of that, shoppers who spent more than $65 got a free tote.

Ric York was smack dab in the middle of the mayhem, with his 18-year-old daughter, Cheyenne.

York and his daughter made it in and out, and they have the discounted loot to prove it.

"That's the thing they were running over each for: The PINK hoodie that's gray," York said.

Chad Carter, who captured the video, said he noticed the crowd and knew he needed to hit record on his phone.

"From an aerial view, you just see this mob and it's compacting in there, and it's like, ‘How are they all gonna fit?'" Carter said. "They were, like, trampling on top of people. There was a girl that was trying to get out that couldn't and it was—it was just insane."

For the Yorks, it was a Black Friday experience they'll never forget, and one that he hopes will become a lesson for retailers.

We reached out to Woodland Hills Mall, but they wouldn't comment beyond telling us that no one was injured and that no fights ensued from the incident.

Victoria's Secret told us they can't comment at this time.

"Contrary to earlier reports today on social media, there were no injuries of any kind when Victoria's Secret opened its doors early this morning at Woodland Hills Mall in Tulsa. There was a big crowd of eager customers waiting to enter this popular store but store personnel has confirmed to mall management that there was no fighting and no injuries."