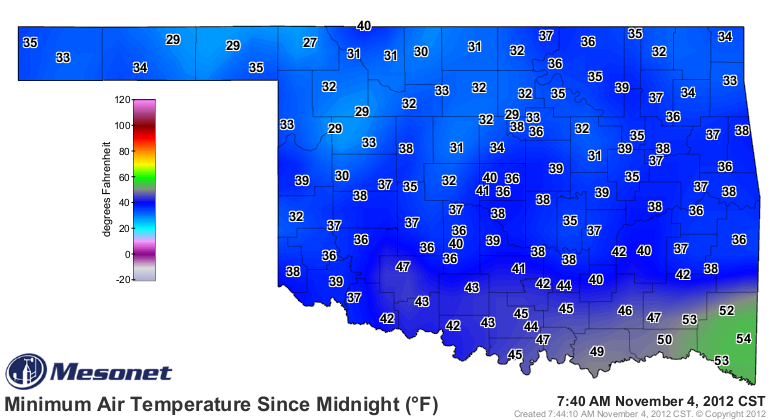 Remember, the time change was overnight so be sure your clocks have been set back one hour as we are now back to standard time.

As the first map on the right shows, our day is starting off on the chilly side with most locations in the 30s first thing this morning. Light winds and lots of sunshine will result in a nice rebound during the day and highs in the mid 60s are expected for this afternoon. It will not be quite as chilly tonight as our winds will be from a southerly direction through the overnight hours and that should keep us generally in the lower 40s to start the day on Monday.

Another weak cool front will be arriving during the morning hours of Monday shifting our winds back to a NW direction and those winds will be rather gusty at 10-20 mph. This is in response to a fast moving, rather vigorous storm system aloft that will be quickly moving on to the SE. Most of the energy from that system will be located just east of us and since there has not been sufficient time for much moisture to return, only a few brief showers may occur for the extreme E counties and on into Arkansas during the day. However, the clouds associated with this system should produce an E/W temperature gradient with highs in the lower 60s extreme E counties and 70 or so for the more W counties. The Tulsa metro area should make it into the mid 60s.

Tuesday will then start off on the chilly side again with lows in the 30s but mostly sunny skies and a lighter wind field should allow daytime highs to reach the mid-upper 60s.

Starting on Wednesday, a more pronounced warming trend will begin as a more SE wind will become more southerly for Thu - Sat and also quite gusty. Those strong southerly winds together with lots of sunshine will produce daytime highs well into the 70s to possibly near 80. Our overnight lows will also be much milder with morning lows in the upper 50s by Friday morning and possibly only near 60 on Saturday morning.

The longer range guidance is coming into a better consensus on the next front which now looks to be arriving during the morning hours of Sunday. Will carry a chance of a few showers/storms for late Saturday in advance of the system, but the better chance should be associated with the front itself. Saturday will also be warm and windy, but Sunday could very well have an inverted temperature profile with the warmest time of day first thing in the morning and falling temperatures after that.

As the QPF map on the right, which is valid through Saturday morning shows, we will be pretty much high and dry until that front gets here. Don't want to get too excited about the prospects for rain with this system as it seems that every time the longer range products show a decent chance of rain, by the time the event actually gets here we have been disappointed. So, will take a conservative approach until I actually see rain falling from the sky!