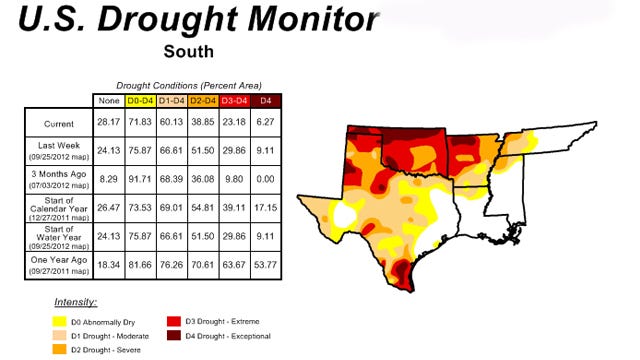 Thanks to soaking rainfall over the southern two-thirds of the state, Oklahoma's drought situation has improved.

According to the latest U.S. Drought Monitor report, released Thursday, many counties have been downgraded from "extreme drought" to "severe drought."

The rains were clearly no drought-buster, but they did help out areas south of Tulsa, according to News On 6 meteorologist Mike Grogan.

Pockets of 5 to 7 inches of rain fell across east-central Oklahoma with the last system. What it didn't do was bring abundant rainfall to the northern fringe of the state. That's where the state has actually seen a worsening of the drought, Grogan said.

Upcoming rain chances with a weekend cold front, along with a long-term projection for wetter-than-normal conditions through mid-October, will help to combat the drought further.