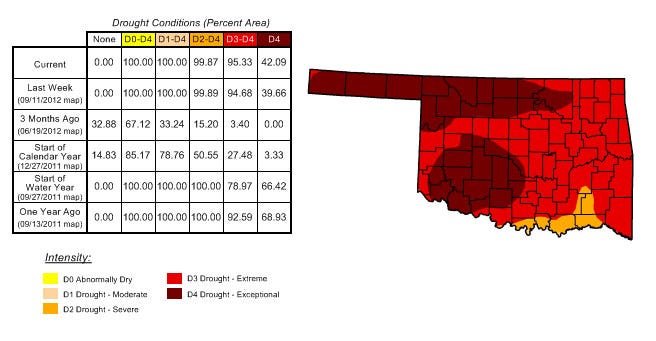 The rainfall late last week appears to have an impact on drought conditions in the eastern half of the state.

The latest data shows that drought conditions compared to a week ago are not improving that much across western Oklahoma compared to the eastern part of the state.

All of north central Oklahoma, most of the panhandle and a large area in southwest Oklahoma remain in exceptional drought status, the worst category.

This week's U.S. Drought Monitor shows almost the rest of the state, including northeast and eastern Oklahoma in extreme drought status.

Just a few weeks ago, most of the eastern half of the state was classified as exceptional drought.

News On 6 meteorologist Michael Grogan says "while the short-term effects were certainly beneficial, the rainfall did not put too much of a dent in our drought."

A small portion of south central Oklahoma along the Texas state line is in severe drought status.