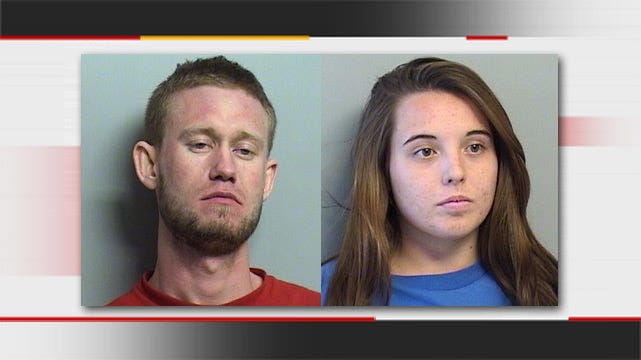 A Tulsa man was arrested for pointing a gun at another driver in a road rage hit and run incident Saturday morning. Robert Lee Snodgrass and a passenger in his truck were arrested by Bixby police.

Both are in the Tulsa County Jail.

A driver contacted Bixby police at about 10 a.m. reporting that someone had rammed his vehicle in the parking lot of Fox Tire Center in the 16900 block of South Memorial.

The victim told Officer Paul Lloyd that the driver of an extended cab Dodge truck pointed a gun at him while they both drove on the Broken Arrow Expressway. He said he followed the truck to the parking lot of the tire store and tried to block the Dodge with his own vehicle.

The driver of the Dodge truck, later identified as 25-year-old Robert Snodgrass, put the truck in reverse and rammed the victim's car, according to the officer's report.

When questioned Saturday afternoon, Snodgrass told police he flipped the other man off after being cut off on the highway. He said the other driver chased him into the parking lot. Snodgrass said his truck rolled back into the man's truck as it tried to block him in.

A passenger in Snodgrass's truck, 18-year-old Taylor Morgan Waters of Bixby, admitted that the Tulsa man had a gun at the time of the accident. She said she gave it to someone else to get rid of the weapon.

Snodgrass was booked on complaints of assault and battery with a dangerous weapon, pointing a firearm, possession of a firearm in the commission of a felony, and leaving the scene of a property damage accident.

Waters was arrested and booked on complaints of being an accessory after the fact, obstructing a police officer and failure to report an accident.