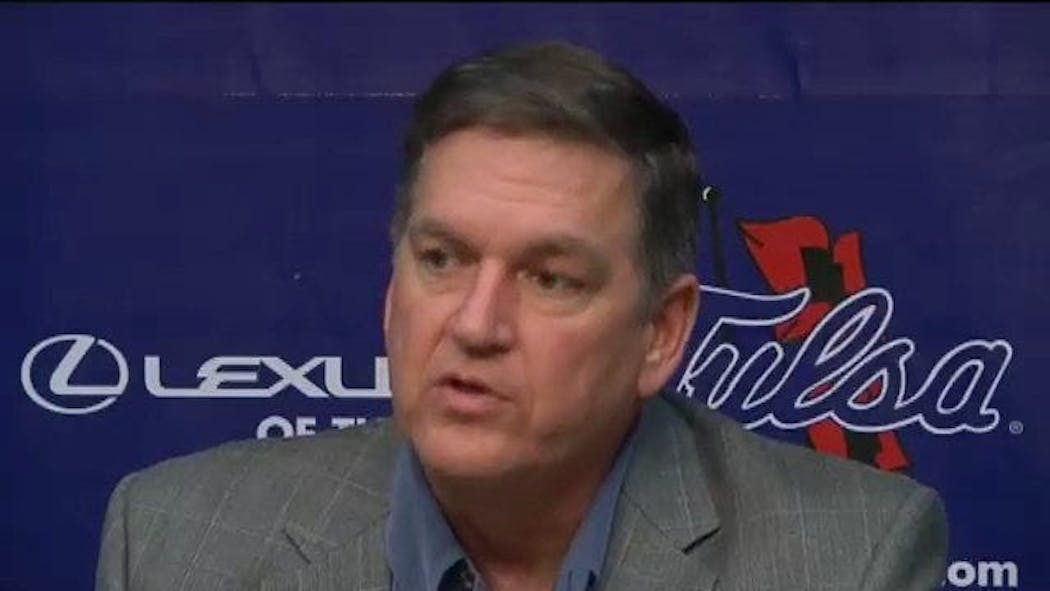 The Tulsa Golden Hurricane closed Tuesday's first full-pad practice with a half hour scrimmage on the grass of Harwell Field and coach Bill Blankenship was pleased with the effort and intensity his team put forth.

"I'm really excited about the way our guys are coming together as a unit," Blankenship said. "The offense got the best of the defense today. It seems to be a recurring theme that we bounce back and forth. We had a great short-yardage drill. Offensively, we had very good production on our fourth-and-one drill, then we scrimmaged some in the red zone at the end of practice and again had some good plays.

"Bryan Burnham had a great catch of a Kalen Henderson pass in the end zone. We're getting solid play all the way around. I really thought we got better as a team today at practice. I'm excited about the progress.

Blankenship said the intensity level seems to go up when the full pads go on, as the team put forth its best effort yet.

"Anytime we put on the full pads, everybody knows it's going to be a lot more physical. They didn't disappoint me today, and I don't think I disappointed them with what we tried to accomplish during the day," he said. "Physical football comes down to short yardage – offense and defense, third downs and fourth downs – you have to make those and you have to stop those. That's what we worked on today and I thought the guys brought it really well."

"The secondary is very deep, especially at cornerback," Guy said. "With John Flanders back in the mix, we have Lowell Rose as a returning starter, and we really only lost Milton Howell from last year. Dwight Dobbins is showing up, and he's a young man that played some for us last year. Some names to think about are Michael Mudoh at safety – behind Dexter (McCoil) and Marco (Nelson), who are our returners – he is playing very well for us. Darrell Williams is another young corner that is showing up and making plays. We also have Darnell Walker, Jr., who is a true freshman. He looks very competitive and looks like he's in the mix.

"We have a lot of talented guys in the secondary, and we hope that will help eliminate big plays. We cannot allow the big throws down the field and the big plays. We feel like we're going to be able to press a little bit more, play up in their face, not give up the easy throws, and disguise our coverages much better with our experience."

And helping that talented secondary out will be job No. 1 for a deep, skilled corps of defensive ends.

"At the ends we have great depth," he said. "We have Cory Dorris and Jared St. John, who are returners, who both made plays in games. Brentom Todd had a really good freshman year, and then we add Derrick Alexander, who redshirted, into the mix, and we have some really good depth there. We'll be able to rotate a lot of guys in. We feel good about the D-Line and what we can do especially when we get to third down where we can put four guys in there that can rush the passer. That will help us tremendously if we don't have to add another guy to it, and we can be able to use a four-man rush to get the quarterback to throw the ball or hopefully sack him."

TU will spend the first part of Wednesday's practice on Harwell Field, before moving over to H.A. Chapman Stadium for a situational scrimmage. Blankenship said they will look at various situations, including live-game, overtime and two-minute scenarios.