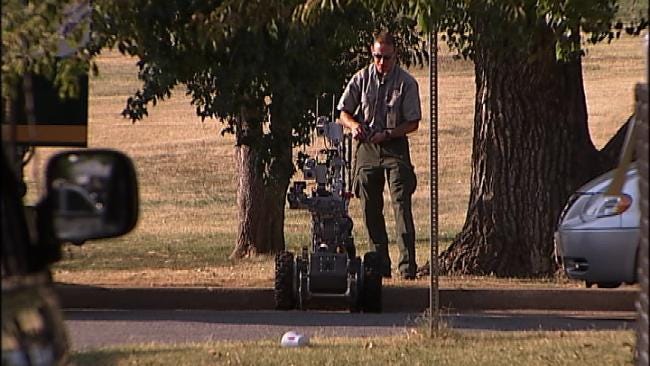 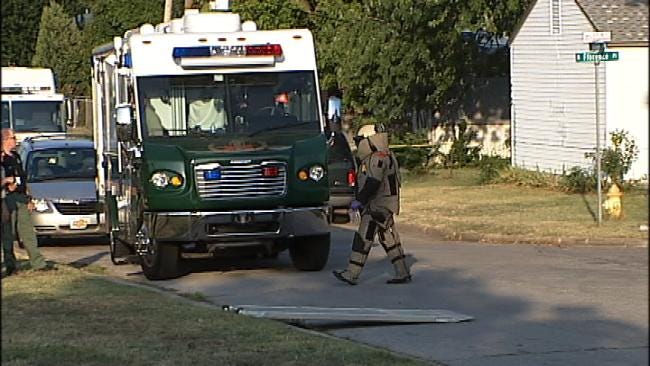 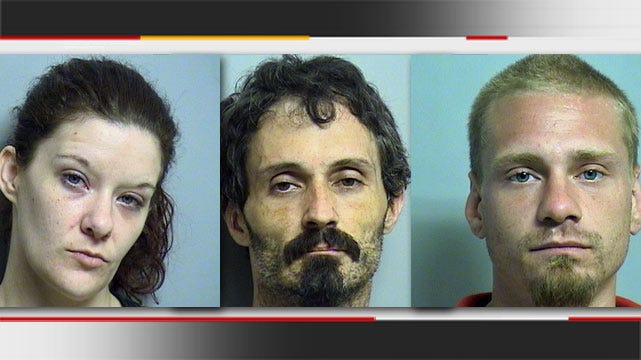 Investigators found explosive chemicals inside a home in the 1500 block of North Florence, while they were conducting a search warrant. Police arrested three people in a case that began as a search for stolen property and ended with a late night detonation of bomb materials.

Police are quick to say the individuals are not tied to any terrorist groups or organized crime, but they still aren't sure what the suspects had planned to do with the homemade explosives.

Bomb experts with Tulsa Police, the ATF, and FBI set off the detonations late Monday night.

It all stemmed from what police found inside the home on North Florence Place while executing a search warrant for stolen property.

TPD said they found 70 grams of explosive materials and another two to three pounds of homemade black powder.

Police said Brian Larkins lived at the home and was making the explosives.

All three were taken to the Tulsa County jail and booked on drug related complaints, as well as felony firearm and receiving stolen property complaints. Larkins was also booked on a complaint of possession of explosive materials.

Nina Hendrix has lived in the house across the street for more than 50 years.

She said that Larkins and his girlfriend kept to themselves, and she doesn't want to think about what could have happened had the explosions detonated in the home.

"I try not to, I try not to think that way, because I know things can happen," Hendrix said.

Police spent Tuesday taking inventory of what they found inside the house.

There was what appeared to be a homemade canon; police aren't sure how it would be used.

They also found a camera bag and laptop computers, as well as several rifles.

Police are still trying to figure out what is stolen property and what legally belongs to the residents.

Police said Larkins liked to make homemade model rockets and they believe he may have made the explosives as a hobby.

The other man arrested, Rathburn, was involved in a police standoff back in May. He was arrested along with three other people, and convicted on charges of receiving stolen property and possession of a firearm with a previous felony conviction.

Following that standoff, officers found rifles they believed to be stolen and also some blasting caps, which had to be removed by the TPD bomb squad.