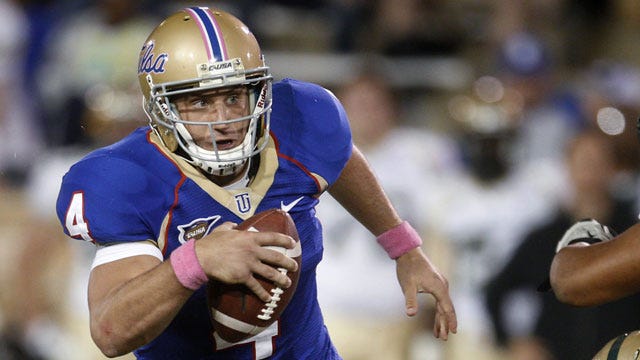 TULSA, Oklahoma – It was tough to tell what type of a team Tulsa really was during non-conference play.

But the bottom line: Since Tulsa has started Conference USA play, it hasn't even been challenged.

TU continued its recent dominance with a 38-7 rout of Southern Methodist on Saturday at Chapman Stadium.

SMU came into the game with several impressive wins under its belt - including a road win at No. 20 TCU – and it's safe to say Tulsa was ready for a challenge. But G.J. Kinne and the rest of the TU offense were like clockwork while the defense forced five turnovers.

The offense wasn't exactly flashy or explosive for the Golden Hurricane in the first half, but they moved the ball at will.

After an initial Kevin Fitzpatrick field goal, Alex Singleton followed it up with a 2-yard score. He had three touchdowns on the day, all from within the 2-yard line.

Meanwhile, G.J. Kinne got in on the short yardage action, scoring from two yards out at the start of the second to give Tulsa a 17-0 lead.

SMU's first and only score of the game came five minutes into the third quarter on a 17-yard run from Zach Line. Line was tied for sixth nationally in scoring coming into Saturday's game with 13 touchdowns on the year.

Tulsa's only touchdown that came from beyond two yards (and its only passing touchdown) came late in the third quarter. Willie Carter took a 40-yard pass from Kinne into the end zone for the final score of the game. Carter continued his impressive play from last week, racking up 173 yards and a score on 13 catches.

The Tulsa defense made sure the fourth quarter remained scoreless, but truly imposed its will throughout the game.

SMU quarterback J.J. McDermott had a night to forget, completing just 17-of-37 passes for 180 yards and four interceptions.

The Mustangs struggled on third down, completing 2-13.

With the win, the Golden Hurricane keeps up step-for-step with the Houston Cougars in the C-USA West Division.

The stage could eventually be set for a showdown with Houston at the end of the season to decide the West, but Tulsa still has three more opponents to go through first.

The Golden Hurricane will travel to Central Florida for a Thursday night matchup against the Knights. Kickoff is set for 7 p.m.