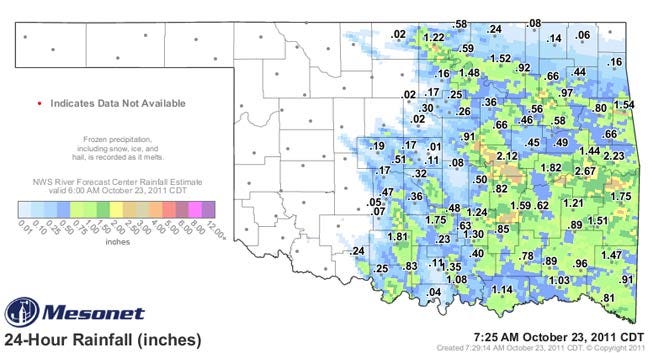 There is a phrase that will occasionally be uttered, usually in desperation, by meteorologists which applies to yesterday's storms. It goes: Northwest flow, weatherman's woe. Pretty simple I know, but that is exactly what happened yesterday. We were in a NW flow pattern which is more typical of late Spring or early Summer and the enhanced shear in such a pattern can, when everything is just right, make storms that would otherwise be fairly well behaved become trouble makers.

Initially, the system did not appear all that impressive, but then things quickly came together at the last moment and the result was the widespread storms that moved through. The location and coverage certainly exceeded what the synoptic situation otherwise suggested leading up to the event. Oh well, at least we received some badly needed rainfall. The map on the right courtesy of the OK Mesonet shows that some folks picked up more than an inch of rain, but there was also some large hail that accompanied the swaths of heavier rainfall. Not a drought buster for sure, but we will take it.

A more zonal pattern aloft for the next few days and a return to southerly winds will result in a couple of very warm days before the next cold front arrives along about Tue night. For today, the morning fog will burn off leaving mostly sunny skies and light winds. Light winds again tonight and the residual moisture could result in patchy fog during the overnight hours followed by mostly sunny skies for Monday and Tuesday. Those southerly winds will become rather gusty by afternoon, especially on Tuesday and that will dry out the fine fuels such as grasses rather quickly. The result will be an enhanced fire danger situation.

As mentioned, the next cold front is still on schedule to arrive sometime Tuesday night. Tuesday should be dry, but there will be about a 30% chance of storms during the overnight hours. Wednesday will see cloudy skies, brisk northerly winds, a very short thermometer, and a decent shot at showers or occasional rain. Showers should linger into the overnight hours, but the longer range guidance has flipped again and now shows the rain quickly moving on to the south on Thursday. Thus, have lowered the rain chances for Thursday, but that may flip again so we will see.

At any rate, there is reasonable consistency in the coming weekend having a return to southerly winds and a modest warming trend by then.

As always, stay tuned and check back for updates.