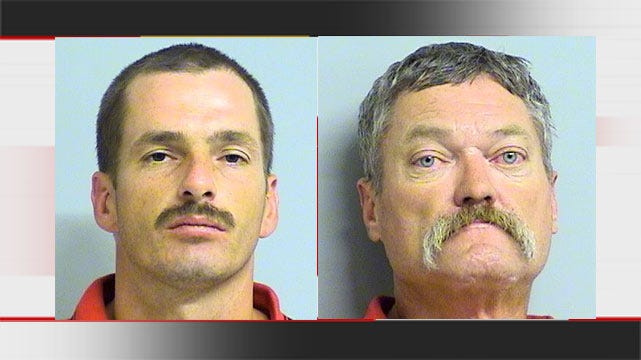 TULSA, Oklahoma -- Two more employees of Murphy Brothers were arrested by Tulsa County Sheriff's Office deputies at the Tulsa State Fair on Thursday on complaints of violations of the state's Charity Games Act.

Anthony Ellis, 32, of Locust Grove and Kenneth McLeod, 44, of Ashland, Georgia were arrested after 9:30 p.m.

According to jail documents, an undercover deputy asked Ellis and McLeod, who were operating the Star Dart Game, what it would take to win the big prize, which was a big Angry Bird.

Ellis asked his co-worker McLeod what the cost would be, the deputy was told one dart would cost $20, "whether he hits or not, he wins."

After missing the target, the deputy was given the big prize. The deputy noticed there were no rules posted or guarantee of a prize.

Under Oklahoma's Charity Games Act, rules of a game have to be posted at the game.  Anyone convicted of violating the Oklahoma Charity Games Act "shall be guilty of a misdemeanor punishable by incarceration for a period not to exceed one year and by a fine of not more than $2,000 or both."

Both Ellis and McLeod were arrested and taken to jail and both men posted bond.