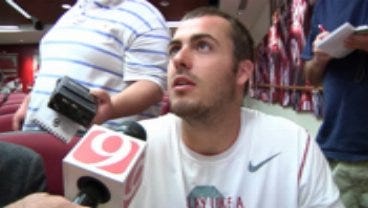 NORMAN, Oklahoma – It might sound cliché, but both OU and Texas have something to prove this weekend in Dallas.

The Sooners have dropped from first to third in the AP poll despite remaining undefeated.

The Longhorns are looking to cement their return to prominence after last year's debacle that everyone associated with Texas would like to forget.

A win against a top 10 team on a neutral field would go a long way for either team in reaching its goals.

"I feel like there's pressure on both teams if you ask me," OU running back Dominique Whaley said. "Both teams are undefeated. We're both out there trying to prove something.

Meanwhile, OU coach Bob Stoops put on a relaxed game face, addressing the all-important issue of dealing with Texas hecklers on the way to the stadium at the Cotton Bowl.

"Jeez, you get all kind of things pointed at you and flexed at you and everything else," Stoops said. "It's the best."

News 9's Dean Blevins was in Norman for more reaction from OU players and coaches on the upcoming game.