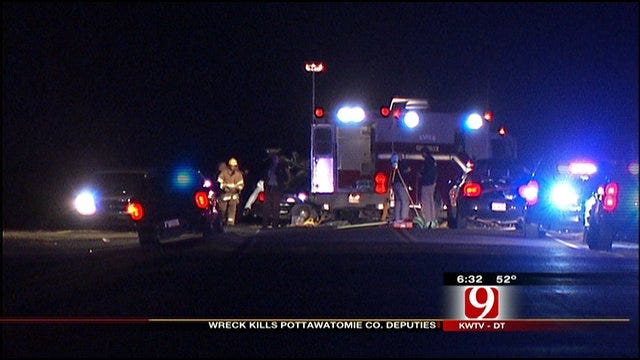 POTTAWATOMIE COUNTY, Oklahoma -- Two Pottawatomie County deputies were killed after a semi pulled out in front of their patrol car Friday evening.

It happened on Highway 39, four miles west of Highway 177 in Pottawatomie County.

According to report, deputies Tim Lowery and Mike Roberts were traveling westbound directly into the setting sun when they collided with a turning semi.

Both deputies were on the warrant team and may have been on the way back to the sheriff's office after serving a warrant.

The Undersheriff remembers the men as leaders in the department.

"Both fun, loving, both had been with the department - as I said  - a long, long time," said Dave Balleweg, Pottawatomie Undersheriff.

"I had actually sat and talked to Mike Roberts yesterday for about 10 minutes, just saw him in the office. They were just good hardworking deputies."