Next Cool Front on the Way. 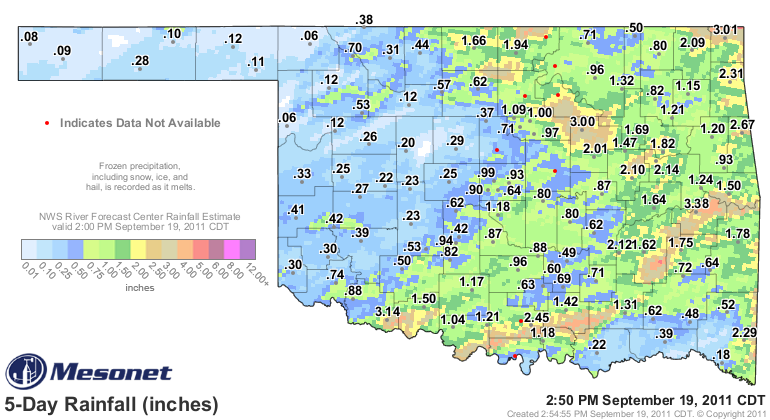 The rainfall over the last several days has certainly been a blessing and in some cases was quite generous. Notice the 5 day total courtesy of the OK Mesonet on the right and you can see some lucky locations received 3 inches or more of badly needed rainfall.

Our next good chance for rain now looks to be on Thursday. Another cool front will be arriving early Wednesday morning but not much in the way of precipitation is currently expected initially. Only a slight 20% chance the way it looks right now, but a more consistent QPF signal is showing up in the various model runs for Thursday. In fact, it is starting to look like one of those days with cloudy skies all day long, showers and possibly some embedded thunder, an easterly wind, and very cool temperatures.

Between now and then, we can expect clear skies tonight with light winds and temperatures cooling off quickly after sunset. We should be generally in the 50s to start the day on Tuesday and with southerly winds returning and lots of sunshine, daytime highs are expected to be well into the 80s. The next cool front will be arriving after midnight Tuesday night so we will have a brisk northerly wind all day Wednesday along with partly cloudy to at times mostly cloudy skies and only a slight chance of rain. Obviously, it will be cooler on Wed but Thursday still looks to be the coolest, wettest day of this week.

That should be followed by partly cloudy skies in time for the following weekend and moderating temperatures although it still appears we will be cooler than normal through the weekend. All in all, not a bad week and certainly no additional threat of triple digit temperatures. In fact, we are now getting late enough in the year and with the current weather pattern in place it appears that any more triple digits would be very unlikely.

Next Cool Front on the Way.