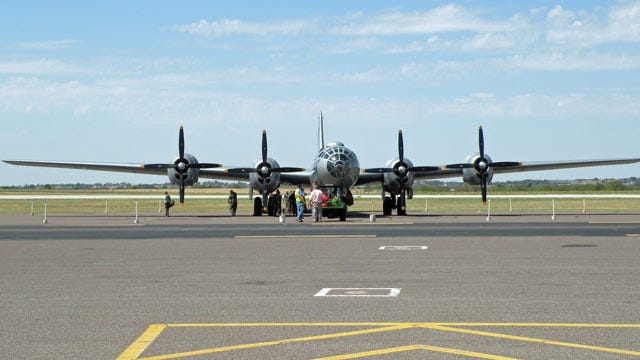 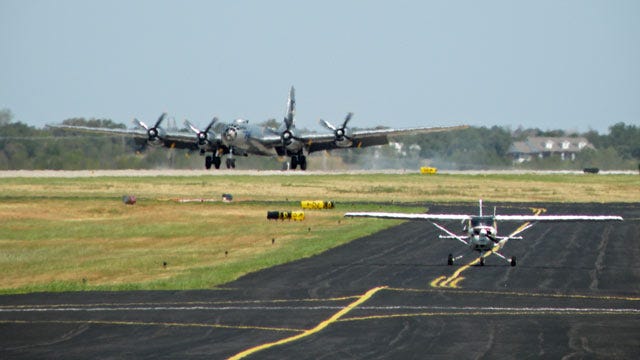 Stillwater, OKLAHOMA -- The only airworthy B-29 bomber in the world landed in Oklahoma Monday.

"FIFI" as she's known is owned and operated by the Commemorative Air Force.  When not on the road she's based at the Cavanaugh Flight Museum in Addison, Texas.

She was originally scheduled to fly to Oklahoma City, but the CAF decided to send her to Stillwater instead because of red tape involved in getting permission to land in OKC.

This is the same type of plane that dropped the atomic bombs on Japan during World War II.

This particular B-29 Superfortress was discovered in the desert in California in 1971, where it had been used as a target for gunnery practice for 17 years.

After being flown to its new home in Texas, B-29 SN44-62070 was refurbished and then flown to air shows all across the country.

In 2005, following a series of engine failures, the Commemorative Air Force decided to replace its unreliable engines with hybrid Curtiss-Wright 3350's.

"FIFI" returned to the air show circuit in August 2010.  It has also received permission from the Federal Aviation Administration to sell rides.

Oklahomans can buy rides on the Superfort for flights Tuesday, September 13, 2011.

According to her web site, here are the different deals:

The group says it even sells corporate packages and gift certificates.

According to its web site, the CAF flies FIFI to about 15 cities a year.

The Commemorative Air Force also owns and flies a B-24 bomber, known as Ol' 927, but she didn't make this trip.   Ol' 927 is one of only two airworthy B-24s in the world and the CAF says her rides cost much less than the B-29 rides do.