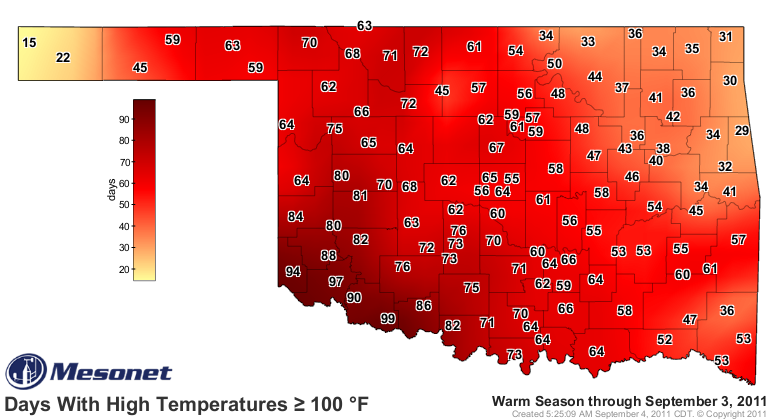 At long last we have cooled off and are finally getting a break in the persistent, excessive heat we have endured all summer. To put things in perspective, the map on the right courtesy of the OK Mesonet shows the total number of triple digit days this year. Notice in extreme SW OK where the Mesonet site near Grandfield shows 99 days. Needless to say, that is an all time record for the state and now that the cooler air has arrived what are the chances of any more triple digits, you ask?

Well, here in the Tulsa area, we have had triple digits in the past as late as Sep 28; so it certainly is not out of the question. Often, we will have one more last gasp of summer before the cooler, fall weather really takes hold. Having said all that, the pattern change that has brought the cooler air is expected to persist for the coming week which will put us further into September. Also, the longer range guidance beyond this coming week suggests near to only slightly above normal temperatures to eventually return. However, the pattern is not currently suggestive of any more triple digits in our future.

So, let's enjoy the coming week which will be downright chilly in the morning hours compared to what we have been accustomed to. Today's gusty northerly winds are bringing very dry air into the state and dew point temperatures could even drop into the 30s over the next few days. This very dry air and the clear skies at night will allow temperatures to fall off quickly after sunset. For tonight, those northerly winds will remain rather gusty which will prevent temperatures from completely bottoming out. For Mon and Tue nights though, lighter winds, clear skies, and the dry air in place could result in some 40s, particularly in the cooler valley locations. As the week wears on, those very cool readings should gradually moderate.

During the day, lots of sunshine, low humidity levels, dry soils and relatively dry vegetation together with a brisk N to NE wind will keep the fire danger relatively high. Daytime highs are expected to stay in the 70s for Labor Day and the last time that happened was back in May. Tuesday will also be in the 70s to near 80 with temperatures gradually moderating for the rest of the week.

Unfortunately, our rain changes are pretty much in the slim to none category. We are still keeping a close eye on TS Lee along the Gulf Coast, but all indications continue to suggest Lee will meander further to the E and NE. The upper level circulation that is left from Lee may wobble back this way later in the week, but at present it appears it will stay far enough east of us to only produce some clouds.

So, it looks like a pleasant week ahead with clear, cool nights and sunny, mild days and a much deserved break in this record setting summer of 2011.

As always, stay tuned and check back for updates.