Drillers Pull Off Sweep Of Arkansas 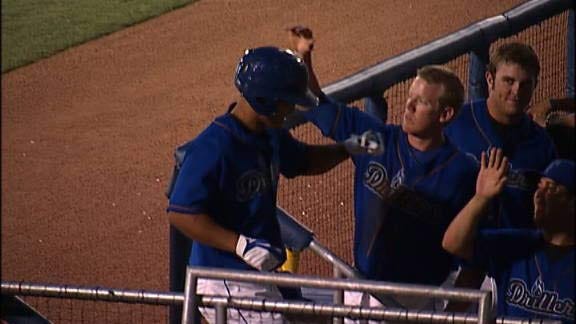 LITTLE ROCK, Arkansas -- Thanks to a strong outing from starter Rob Scahill, the Tulsa Drillers capped off a four-game sweep of Arkansas by knocking off the Travelers 6-2 Friday.

Scahill (10-11) kept the Travelers' (63-64) offense in check, pitching seven innings – 4.1 scoreless for Tulsa (62-68) – giving up just one earned run on five hits and striking out four in the win. Eddie McKiernan (7-12) struggled in his outing, giving up five earned runs on 11 hits in six innings, despite striking out eight batters.

After two scoreless innings, Thomas Field knocked a ground-rule double to right field with the bases loaded, bringing Hector Gomez and Ben Paulsen home to take a two-run advantage. James Cesario hit a two-run single to center field in the next at-bat to bring Brian Rike and Field home to give the Drillers a 4-0 lead.

Two batters later, Michael Mitchell hit a sacrifice fly to right field to score Cesario and make it a five-run advantage for Tulsa.

Leading 5-1 in the top of the sixth, the Drillers added one more to the total thanks to a sacrifice fly by Paulsen to bring Wheeler home and close the door on any comeback attempt.

With the win, the Drillers continue to scrap for the second-half Texas League North playoff spot, moving within four games of Northwest Arkansas, heading into a four-game series against the Naturals.

Drillers Pull Off Sweep Of Arkansas