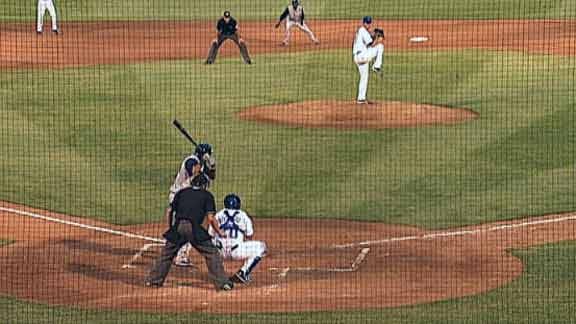 TULSA, Oklahoma – The Tulsa Drillers fell to the Frisco RoughRiders Monday for their second loss in a row after being held to five hits and two runs in the 4-2 decision.

Both teams got on the board in the first inning. For Frisco Renny Osuna opened the game with a base hit off Tulsa starter Christian Friedrich. A pair of wild pitches moved him to third, where he scored on a two-out hit from Michael Bianucci.

Similarly, the Drillers answered in the bottom of the first. Tim Wheeler led off with a single, advanced to second on a wild pitch and scored on a two-out base hit by Bronson Sardinha.

Tulsa took a 2-1 lead in the bottom of the second when leftfielder Brian Rike belted his 10th home run of the season. Rike is now the seventh Drillers player to reach double figures in homers this year.

The RoughRiders used a long ball to retake the lead in the top of the third. With one on and one out, Jonathan Greene knocked his 18th home run of the season to put Frisco up 3-2.

Yet another homer upped the lead to 4-2 in the seventh, as Frisco's Bianucci sent one over the fence into the right field bullpens. It was the 28th home run of the season for the outfielder.

Tulsa was held to only five hits in the game with third baseman Erik Wetzel accounting for two of them, getting a single and a double.

Tulsa's Friedrich failed to work past the fifth inning for the third time in the last four starts. The lefthander lasted 4 2/3 innings, surrendering seven hits and three runs.

Frisco reliever Adalberto Flores allowed only one hit in 4 2/3 innings to collect the win and improve his record to 5-3. Justin Miller pitched a 1-2-3 ninth to pick up his ninth save of the season.

The Drillers will now travel to Little Rock and will open their final road trip of the regular season Tuesday night at 7:10 p.m.